It's past time to do the right thing

Depending on who I listen to, as a white, male clergy member, now is either the time for me to speak up or to shut-up. This does not bother me. I understand why people of color would have these very different responses to what to what is going on here in the United States right now. For the most part, I am simply trying to listen. I'll be honest, I don't like everything I hear. That's okay.

Listening is difficult and requires effort. Some of the things I hear that I don't like I need to hear. But there are some things that I think are wrong and untenable. I think I understand why some people want to go to extremes. In any case, I am prone to err on the side of believing silence is complicity.

While hatred is an ever-present reality, I mustn't mistake understandable anger and resentment for hatred. I am not new to anti-racism. While I am open to new and constructive ways to engage, I am neither looking askance at what to do nor expecting kudos for doing what my humanity and Christianity require of me at this moment. What I see right now is an opportunity for change, for genuine reform, and forming a more perfect union.

As U.S. history demonstrates, especially when it comes to race and racism (the United States of America's original sin), this change only comes about through struggle. However, the struggle that brings about change, while revolutionary, is not a violent overthrow: one bloody civil war is enough. Now, some might read that as a hidden way of defending an unjust system. No human system is perfectly just. I think the United States, constitutionally, has the resources to remedy the injustices that people are rightly protesting.

Movements for positive change require moral leadership and sound principles. While in the eyes of some I might be overstepping my bounds, as a Christian, I think non-violence, which is not passivity, works best when dealing with brutal, violent structures. One reason is obvious: non-violence brings into bold relief the brutality and violence of oppressive structures. Non-violence requires commitment, discipline, and willingness to sacrifice. Non-violent protest is not, as some on the right insist, virtue signaling. Non-violent protest is also inclusive of anyone who wants to participate.

While effective movements for change require moral leadership, it requires moral leadership on the other side, too, for change to happen. What I fear right now is that the lack of moral leadership at the national level will only add fuel to fire of resistance, thus enabling advocates of violence to prevail. After three-and-a-half years of race-baiting and racist dog-whistling, it's easy to see why many people are not hopeful about positive change.

I will admit that earlier this year, before any of the events of the past several months, I flirted with the idea of not voting. While I will not publicly make partisan endorsements, my political commitments are not hidden or vague. Given the politics of the state in which I live, I also toyed with the idea of voting for a third-party candidate. I did this in 2016. 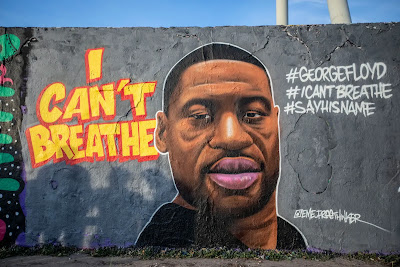 Given that hindsight is 20/20, I still go back and forth over my 2016 voting decision. At this point, I am forced to admit that if I could go back and vote with foresight, I would vote differently. It is important for me to state unequivocally that I will vote this November. I urge everyone who reads this to do the same. Rather, than vote to show my disdain for what our two-party system has become and/or to keep a pristine conscience, I will vote to ensure that our country can return to some kind of normalcy. Nonetheless, I still firmly believe that how our nation came to be where it's at now is by consistently being forced by our two major parties to choose the lesser of two evils. Both sides are committed to a common baseline of things that need to change.

At present, the nation is being divided on purpose. It is a political strategy. This strategy is not aimed at building a majority. Rather, as in 2016, maintaining a ruling minority. To this end, our president is intent to rouse the demons in our souls instead of summoning what President Lincoln termed, in his First Inaugural Address, "the better angels of our nature."

In terms of George Floyd's death, in addition to my Pentecost homily, I feel I need to state that all lives can't matter until Black Lives Matter. It's the same the world over. Take Israel, where those formerly oppressed (and currently oppressed; antisemitism, even in the U.S., is real) have become the oppressors. In that context, all lives can't matter until Palestinian Lives Matter.

Making Black Lives Matter is not simply a function of time. It requires focus and persistent effort at every level of government. When it comes to the lasting legacy of chattel slavery in the United States, time clearly has not healed the wound. Lately, the scar has been torn from the wound and dirt has been thrown in it.

The 8 minutes and 46 seconds that white officer Derek Chauvin had his full body weight on the neck of George Floyd stands both as evidence for and a powerful symbol of this sad, sick state-of-affairs. To paraphrase Orwell from 1984: I shudder to envision a future in which a white police officer forever kneels on a black man's neck while the black man says, "I can't breathe."
at June 05, 2020