St. Lucy's day, which comes a week after St. Nicholas' memorial, marks another high point in our household during Advent. The following is a slightly re-edited re-post from 2006.

Santa Lucia was a young Sicilian girl who promised God she would live as a virgin in devotion to Christ. Despite her desire, Lucy's mother arranged to marry her off to a pagan suitor. Lucy sought to dissuade her mom by means of a miracle. To that end, Lucy began praying at the tomb of St. Agatha (another Sicilian saint who was martyred between 250-253) that a hemorrhage from which her mother suffered would be cured. When her hemorrhage got better and completely stopped, Lucy's mother agreed to cancel the proposed marriage. 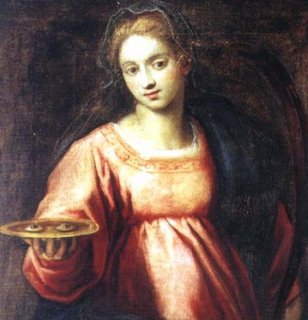 The pagan suitor did not take the cancellation well and sold Lucy out as a Christian. Authorities went to collect her, planning on forcing her into prostitution -- but they were unable to budge her, even after tying her to a team of oxen. She was then tortured by having her eyes torn out. They'd planned on torturing her by fire, too, but the fires kept going out. She was then killed by being stabbed in the throat with a dagger. She was martyred in 303 AD, during the Diocletian persecution. Do we, like St. Lucy, in our "struggle against sin" resist "to the point of shedding blood" (Heb. 12:4)? How do we give witness, martyria?

Because of the above, St. Lucy is the patron of those with eye problems, and is often depicted carrying her eyes, usually on a plate, and/or being tied to a team of oxen, with St. Agatha, or before her judges. Her relics lay in Syracuse for hundreds of years, were translated to Constantinople, and then to Venice where they may be venerated at the Church of San Geremia. Her head was sent to Louis XII of France, and reposes in the cathedral of Bourges, which is the Cathedral of St. Etienne, or St. Stephen- my patron. 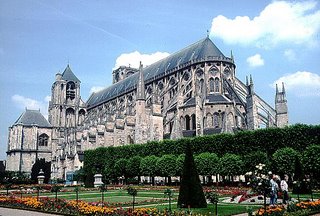 Her name, "Lucia," means "Light," and light plays a role in the customs of her Feast Day. In Italy, torchlight processions and bonfires mark her day, and bowls of a cooked wheat porridge known as cuccia is eaten because, during a famine, the people of Syracuse invoked St. Lucy, who interceded by sending a ship laden with grain.

In Sweden on St. Lucy's day, the oldest daughter of a family will wake up before dawn dressed in a white gown for purity, often with a red sash as a sign of martyrdom. On her head she will wear a wreath of greenery and lit candles, and she is often accompanied by starboys, her small brothers who are dressed in white gowns and cone-shaped hats that are decorated with gold stars, and carrying star-tipped wands. "St. Lucy" will go around her house and wake up her family to serve them special St. Lucy Day foods. This is a custom, which, thanks to my lovely wife, we have observed the last nine years, since our oldest daughter was three. I rejoice in our domestic Church!

Lord,
give us courage through the prayers of Saint Lucy.
As we celebrate her entrance into eternal glory,
we ask to share her happiness in the life to come.

Grant this our Lord Jesus Christ, your Son,
who lives and reigns with you and the Holy Spirit,
one God, for ever and ever.

While I am on the beauty of devotions, Rocco writes of the five million of our sisters and brothers, which comes to "[t]wo and a half times the number of Muslims who've spent the past week on Hajj in Mecca," who went to Mexico City yesterday to observe the Feast of Our Lady of Guadalupé. If this is not an Advent sign of hope, then I do not know what one looks like!
at December 13, 2008