"When we in our weakness believed we were strong"(Michael Card). . .words from bald guys

"Okay," you might say after reading this post, "You wrote that your last post was the last word on the Ted Haggard scandal." In all honesty I thought it would be. However, as it turns out, it will not be. After all, I think wrote that at least twice about Pope Benedict's Regensburg speech. I find that when I start apologizing for going on about something it is a sure sign I have not fully processed the matter and apologize out of a fear of placing my burdens and concerns before other people who are not my confessor or spiritual director, men who have agreed to help me shoulder my burdens, my co-discerners of God's will. Processing the Ted Haggard scandal is important for me because, as a minister, it is a warning to me about some of the pitfalls of ministry; it is a danger sign telling me to avoid, by God's grace and the support of God's People, pits I have seen ministers of the Gospel of Jesus Christ fall into. It seems particularly opportune on this, Martin Luther's birthday, which is the eve of my own birthday, on which I will turn 41, thus officially beginning my fourth decade, as we count 1 to 10, hence, 31-40.

It also gives me an opportunity to introduce another member of my community of the heart, Michael Spencer, known as the internetmonk. Should you choose to enter the cell of the internetmonk, you'll see why Michael needs no further introduction from me. Michael is a self-described post-evangelical, an unapologetically reformation Christian, who, strangely, loves Pater Tom. I think Michael's paradoxes are what attract me to his writing, speaking, and thinking. If it weren't self-flattery, I'd write that, despite our theological differences, we are cut out of the same cloth (Wow, talk about an oblique form of self-flattery!).

If I ever make my long-planned pilgrimage to Gethsemani Abbey in Kentucky, I plan to head further east in the Bluegrass state to meet, break bread, pray, argue, and have a few brews with Michael. Anyway, here is what he wrote back in 2004, in an essay entitled When I Am Weak, an excerpt from which he re-posted in light of recent developments. He picks up where Frederica left off in yesterday's discernment.

"Evangelicals" [I'd substitute the word Christians, to include Catholics- an American element of evangelicalism that has spilled over] "love a testimony of how screwed up I USED to be. They aren't interested in how screwed up I am NOW. But the fact is, that we are screwed up. Then. Now. All the time in between and, it's a safe bet to assume, the rest of the time we're alive. But we will pay $400 to go hear a 'Bible teacher' tell us how we are only a few verses, prayers and cds away from being a lot better. And we will set quietly, or applaud loudly, when the story is retold. I'm really better now. I'm a good Christian. I'm not a mess anymore. I'm different from other people. 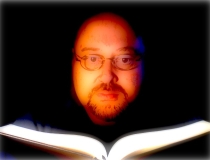 "What a crock. Please. Call this off. It's making me sick. I mean that. It's affecting me. I'm seeing, in my life and the lives of others, a commitment to lying about our condition that is absolutely pathological. Evangelicals call Bill Clinton a big-time liar about sex? Come on. How many nodding 'good Christians' have so much garbage sitting in the middle of their lives that the odor makes it impossible to breathe without gagging. How many of us are addicted to food, porn and shopping? How many of us are depressed, angry, unforgiving and just plain mean? How many of us are a walking, talking course on basic hypocrisy, because we just can't look at ourselves in the mirror and admit what we a collection of brokenness we've become WHILE we called ourselves 'good Christians' who want to 'witness' to others. Gack. I'm choking just writing this."

I agree with Michael that oftentimes our best witness to the power of Christ is our brokenness, our failures. This is no innovation, it is not a new insight, it is straight out of Scripture. St. Paul, in chapter twelve of his second letter to the Church at Corinth, verses 7-10, writes:
"Although if I should wish to boast, I would not be foolish, for I would be telling the truth. But I refrain, so that no one may think more of me than what he sees in me or hears from me because of the abundance of the revelations. Therefore, that I might not become too elated, a thorn in the flesh was given to me, an angel of Satan, to beat me, to keep me from being too elated. Three times I begged the Lord about this, that it might leave me, but he said to me, 'My grace is sufficient for you, for power is made perfect in weakness'. I will rather boast most gladly of my weaknesses, in order that the power of Christ may dwell with me. Therefore, I am content with weaknesses, insults, hardships, persecutions, and constraints, for the sake of Christ; for when I am weak, then I am strong". Note that the emboldened and underlined words are our Lord's to Paul in answer to his prayer. Remember what Anthony Bloom wrote, "To meet God means to enter the 'cave of a tiger' - it is not a pussy cat you meet - it's a tiger. The realm of God is dangerous. You must enter into it and not just seek information about it."

As a reformation Christian- a Calvinist- Michael adheres to the doctrine of total depravity, which, as a Catholic, albeit an Augustinian Catholic, as opposed to a more optimistic Thomist, I reject. I believe the imago dei in each one of us is defaced and, to some degree depraved, but not totally. If we retain anything of the divine image in which we are created, we retain some capacity for good, even if it merely takes the form of hope and longing, the simple recognition that we need to change, that, in the words that begin Jesus' public ministry in Mark's Gospel, we need to "Repent, and believe the gospel" (Mk 1,15).

So, with that theological clarification, I can wholeheartedly agree with Michael when he says, in a recent podcast, that sometimes "It's just simply necessary for us to be humiliated for Christ to be seen. We would love for Christ to be seen in our [making a nice REM- my favorite all-time group- allusion] shiny, happy, perfect, flawless, trouble-free lives and that's not way it is. Read the New Testament. Christ is seen whenever these vessels of weakness are filled with his 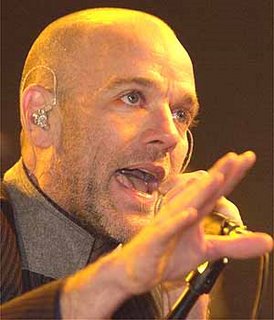 power, and glory, and presence. And many times there has to be events, losses, griefs, trouble that create the opportunity for Christ to be seen." Michael's point? I'll let him answer, "God brings good out of bad, that's what God does."

In no way has God shown this more definitively than in bringing life from death in Christ's resurrection. Our faith, which itself is a gift from God, not something earned, or done on our own initiative, tells us "There will be living where once there was death. There will be new life in Jesus" (John Michael Talbot Advent Suite (Parti/Partii)). On this Friday, let us not forget the symmetry, the theo-logic, that, while Resurrection necessarily follows Good Friday, Good Friday necessarily precedes Resurrection.
at November 10, 2006