As a Catholic Christian and clerical blogger, April (sometimes March) leaves me feeling a bit spent blogging-wise because, well, the Triduum and Easter. I can certainly say that on this Second Sunday of Easter, which we Roman Catholics observe as Divine Mercy Sunday, I am not at my most imaginative or creative. I remember years ago in a homily for Divine Mercy Sunday hearing that the Sacrament of Penance is the first gift given by the resurrected Jesus to his nascent Church. If one takes today's Gospel reading as St. John's account of the institution of this sacrament, then that seems to be the case.

I think it is important when considering the Johannine account of Jesus's resurrected appearances to his disciples (there no "apostles" in the Gospel of John) not to view Thomas's doubt as sinful in the least. Up to the point of his own encounter with the risen Lord, Thomas had only heard his companions telling him the story of their experience of seeing the Crucified alive. How would you respond to such reports, even if those telling you seemed sincere? Do the dead really come back to life?

It is important, I think, to point out that Thomas did not divorce himself from the community of disciples even though he clearly did not believe what they told him. Was he not with them the very next week, on what we call Sunday? It is important to point this out because it is not only okay but important to bring your doubts to Mass. After all, where else might you touch and taste the wounded and risen Jesus?

We experience doubt whenever we wonder whether God will forgive us again. As Pope Francis noted during the Jubilee of Mercy several years ago: you will grow weary of asking God for mercy well before God tires of being merciful toward you. His mercy endures forever. Divine Mercy has the peculiar attribute of seeming too good to be true.

As to the matter of apostles, in today's Gospel Jesus sends his closest disciples just as the Father sent him. An apostle is one who is sent forth. At the end of each Mass you are sent forth. Hence, if you limit the Church's apostolicity merely to apostolic succession, you have a very truncated view of what it means to profess the Church as apostolic. More than that, if that is your view, you let yourself off the hook far too easily. If your understanding of what it means to say the Church is apostolic is limited to apostolic succession, then in what sense can you consider yourself a disciple of the Risen One? 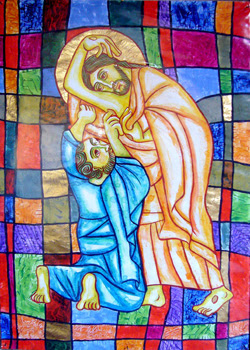 In our reading from the Acts of the Apostles, which occurs post-Pentecost, Peter's healing shadow is the shadow of the crucified and risen Christ, who brings healing in his wake. Forgiveness of your sins is the healing that brings the wholeness for which you so desperately long. Like Peter, as Christ's disciple, your shadow should be the shadow of the Risen One. Stated in a more concrete way, worship that does not result in service is not Christian worship. Again, this is why our worship concludes with being sent to make Jesus Christ present wherever you go. This is what it means to cast the shadow of him who died, rose again, and now lives forever. Christ's Easter victory is your Easter victory. Healed and given new life impels the one who receives these great gifts to share them with others.

Notice that the resurrected Jesus asks Thomas if he believes only because he has seen and touched him. It's an unanswered question. Or is it? I think Thomas's profession "My Lord and my God" is one that can only be sincerely made by the power of the Holy Spirit (1 Cor. 12:3). As Jesus tells Peter in St. Matthew's Gospel after Peter has confessed Jesus as Christ and Lord, "flesh and blood has not revealed this to you, but my heavenly Father" (Matthew 16:17). In my view, a very good case can be made that Thomas's implied answer amounts to - "No, Lord, I do not believe only because I have seen, touched, and felt your resurrected body."

It is the Spirit of the resurrected Jesus that enables those who have faith to believe. This brings us quickly to a paraphrased version of an observation made by Dostoevsky: a person does not come to believe because she experiences a miracle; a person experiences a miracle because she believes. Or, as St. Anselm of Canterbury put it: "I do not seek to understand in order that I may believe, but I believe in order to understand." In short, knowing the what of something does not satisfactorily answer that most human all questions - Why?

In his wonderfully eccentric autobiography, Ecce Homo, Friedrich Nietzsche refers to "Christians and other nihilists." There is a sense in which one can believe Christ rose from the dead and utterly fail to grasp what this means for his own life. "Christ is risen. So what?" There is a way of considering one's self a Christian in which one merely takes, as opposed to gratefully receiving, what God has given us in Christ. Because it amounts to taking, such a belief does not rise to the level of faith and so has no effect on how such a person endeavors to live.