I don't want to be dismissive of people

A Facebook friend, who happens to be a religious sister, writing about her experience of morning Mass yesterday, the Thursday after Ash Wednesday, noted that the sleep-deprived priest who celebrated Mass said: "I know this is going to make me VERY unpopular, but if you couldn’t receive ashes... you did NOT commit a sin. So please don’t go to the rectories at 2am knocking on doors to get ashes (true story...every year). Getting ashes is not as important as going to Mass and confession." The priest continued, "I AM NOT SAYING THAT GETTING ASHES IS BAD. I am saying that people are very desperate to get them and might give this sacramental more importance than going to Mass. I see it every year." As noted with regard to fasting, sometimes when we're in a state of deprivation things become clearer, simpler.

From a Catholic standpoint, a sacramental does not trump a sacrament (i.e., receiving ashes pales in comparison to going to confession and Mass, as the priest noted). Being a sacramental, the palm ashes we receive on Ash Wednesday are symbolic. What the ashes symbolize is my determination to repent. Repenting is a three-fold movement. First, I examine my conscience in order to bring my sins of omission and commission to light. Second, I express sorrow for my sins. Third, I resolve not to live that old life anymore, to turn over a new leaf, to live as a disciple of Jesus Christ.

I responded, "Yes, it gets a bit worrisome at times, this obsession with the ashes." Being the insightful person she is, my friend kindly provoked me by asking - "why do you think that is? Death? Tribalism? Knowing you are Catholic and going thru great lengths that one day a year to show that somewhere, deep down, you believe?" Appreciating the opportunity her questions gave me to reflect more deeply and with a more kindly countenance, I stated:

I don't know. I mean, there is something moving about the desire for sure. In response to your thoughtful questions, I would say, all of the above. I don't want to be dismissive of people.

I am not sure why people want to have ashes imposed and not at least come to Mass. I am even okay if someone comes, stays through the Liturgy of the Word, and then departs after receiving ashes. Working in good faith, I see their showing up at all as an act of faith, if not yet a commitment to discipleship. In some ways, I suppose, this may be a more honest approach

Such a disposition does not strike me as an empty show! 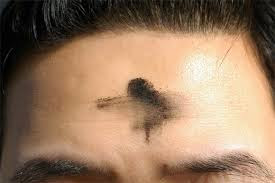 Sr. Rose's thoughtful questions prompted me to do something I need to do more often - draw from my own experience:

After returning from bringing ashes and Communion to Catholic residents of a local care facility, I was in the church alone. I took the opportunity to pray, to spend time with the Lord. As I did so, out of the corner of my eye, I noticed someone moving into the church from the narthex. As I had unlocked the church doors and left them unlocked, this was fine, even good. Then a young Hispanic mother with 2 small children, aged maybe 4 to 7 years old, approached me and asked about ashes. Kindly, I told her that Mass started at 7:00 PM (it was then about 6:20 PM). She meekly thanked me and then left.

There were too many people at Mass for me to see if she came back with her children, I was looking for her, hopeful that she came back. I certainly hope she did. Later that night I wondered if I should've just imparted ashes to them when they came

Upon reflection, these things always wind up quite ambiguously for me.

Yesterday I read that the retired Anglican Archbishop of York, John Habgood, died. In a short article on him ("John Habgood, former Archbishop of York, dies aged 91"), BBC News recalled an incident from Habgood's life when British Prime Minister Margaret Thatcher once upbraided him for not "providing moral certainty." To which Habgood, who possessed a most cogent intellect and apparently a dry wit, replied, "But have you thought that moral certainty might be a sin?"