The Lord's Baptism & the half-hearted observance of post-modern Christmas

Today Roman Catholics in the United States celebrate the Feast of the Baptism of the Lord. Usually, this feast is celebrated the Sunday after Epiphany. But because the Nativity of the Lord fell on a Sunday this year, our observance of the Lord's Baptism was pushed to Monday. Hence, Christmas ends with a whimper, not a bang. You know what? I am alright with that, especially this year.

Today I ran across an article written by William McIlvanney way back in 2001 for the Scottish national newspaper, The Scotsman. McIlvanney is considered the "godfather of Tartan noir." In addition to being a well-regarded novelist and astute social commentator, McIlvanney was also an accomplished poet.

In the article, dated 30 December 2001 and entitled "Religious ritual still has place in modern world," McIlvanney, observing the widespread loss of Christian faith, noted, "post-modern" Christmas, for many, can been seen as

the intensive care unit of a dying faith kept dubiously alive on the life-support machine of commercialism. Every year we go along with the ritual since it isn't unpleasant anyway and the patient [faith] is a part of all our pasts [though increasingly it is not part of the pasts of many people]. But we don't really expect to see so much as the eyelids flicker. Perhaps it's just that, like the drunk man in the church, we like the company

McIlvanney, who in the piece admits to being a "devout agnostic," doesn't spare Christian leaders, criticizing their largely uninspired, painstakingly parsed Christmas messages, writing: "A Citizens' Advice Bureau is no substitute for a burning bush. The word of a politically correct Jehovah is about as compelling as that of an insurance salesman" 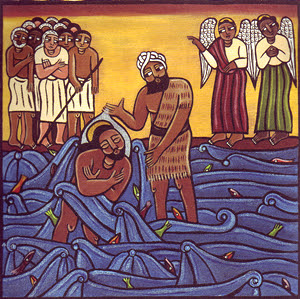 Despite not being a practitioner of Christianity, McIlvanney certainly grasped the consequences of the widespread loss of faith both to the planet and our humanity: "Run a universe?", he asked about human beings, "We couldn't run a raffle." We demoted God, he continued, and so "the word was with us. We could author the meaning of our own lives. Unable to believe, we could live our own fictions and suspend disbelief that it wouldn't all turn out well...

"...So I wouldn't mind if God were there. I am not saying I believe in him but I can't think of too many other solutions that would provide an answer. Can you? Merry Christmas."

Baptism is the sacrament of faith. It was Jesus who asked, "when the Son of Man comes, will he find faith on earth?" (Luke 18:8). You see, faith is more than belief. McIlvanney seemed to grasp that too. Commenting on the boilerplate nature of the aforementioned Christmas messages, he observed:


There were references to the suffering of children and the need for shared values and the overcoming of religious and cultural differences.

As statements, these were all utterly unexceptionable. But the problem with assertions which nobody could seriously argue against is that there's not much point in arguing for them either. We know these things already. The only question is how to put the knowledge into practice