Many people believe that the picture below accurately captures what it means to accept the most fundamental dogma of the Christian faith, the mystery of the Most Holy Trinity. Believing that our faith is built on a gross arithmetical error, something that is contrary to reason, is utterly unacceptable, not just theologically but even in purely human terms. I understand that the meme is meant to be humorous and, yes, I chuckled when I first saw it. But as I chuckled, I thought, "This is what a lot of people, including many Christians, believe it means to figure out the mystery of the Most Holy Trinity."

Even as I realize the imprudence of attempting to describe how humor works (it just does!), I'll note that sometimes what makes something funny is that it pithily captures something that is true in an honest, if obtuse, way. Of course, there is no such thing as Catholic math, or Christian math, or Jewish math, etc. Math is math. As one of the "Deep Thoughts by Jack Handy," which used to be a regular feature on Saturday Night Live, put it- "Instead of having 'answers' on a math test, they should just call them 'impressions,' and if you got a different 'impression,' so what, can't we all be brothers?" All of this is just a way of saying that if you understand 1 and you understand 3, then you grasp that they differ by 2 every time. This remains as true for the Most Holy Trinity as it does for the number of beans on the table.

If what is shown in the picture were what was proposed for your belief and you accepted it, you'd be stupid. It's that simple. Fortunately, that is not what is proposed. 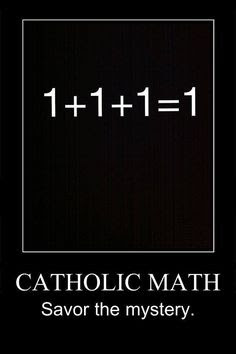 While there is a distinction to be made between beliefs of reason and beliefs of faith, it is important to note that what we believe on faith is not unreasonable. The fundamental problem with the "Catholic math" depicted in the humorous meme is that it makes a category error. The error results from the attempt to turn a belief of faith, something that is a matter of revelation, into a belief of reason, something a person is able to figure out all on his own. This goes on all the time in more seemingly sophisticated ways and is an error made repeatedly by the so-called New Atheists and others. All of this amounts to an attempt to reduce God, the ultimate mystery, to our own measure. It seeks to make God, the ultimate reality, somehow measurable and, if not in some way measurable, then not real. If you're deadset on sticking with math, I urge you to go with multiplication: 1 x 1 x 1 = 1.

The nature of the divine expressed as one God in three divine persons is a mystery. Employed theologically, the term mystery is not something unknown, but something known only because God has revealed it. While Catholics believe dogmatically that it is possible to know that there is a God by light of human reason unaided by divine revelation, it is not possible to know that God is triune except by divine revelation. The fullness of God's revelation is Jesus Christ.

While there is a real distinction between the divine persons (i.e., the Father is not the Son, the Son is not the Father, neither the Father nor the Son is the Holy Spirit and vice-versa), there is a mysterious unity of these three persons that make them one God and not three gods. What is this unity? Okay, that is not a question that is completely answerable, I suggest that one of the best descriptions of divine unity can be found in the fourth chapter of 1 John, where twice in eight verses (8-16) we read "God is love." This is not reversible because "love is God" and "God is love" don't mean the same thing.

It has been noted a number of times throughout the history of the Church that the Holy Spirit is the love between the Father and the Son personified. This is why the family- father, mother, and child- is often seen as an icon of the Most Holy Trinity. At a minimum, love requires a lover and beloved.

Being profuse (i.e., exuberantly plentiful; abundant, lavish; extravagant) love that is truly love moves outward- this is why the Church teaches that, in addition to the good of the spouses, marriage is ordered by its very nature to having and educating children (see Canon 1055 §1). Despite the justified historical/canonical objections as to how the filoque (i.e., "and the Son") was inserted into the Creed, I am a fairly unabashed proponent of the double-procession of the Holy Spirit (i.e., the Holy Spirit "proceeds from the Father and the Son" [filoque], not the Father alone).

While the mystery of the Most Holy Trinity can be apprehended, it cannot be fully comprehended. God qua God remains ineffable. God is at once immanent and transcendent, that is, closer to us than we are to ourselves and completely other at one and the same time. God fills the cosmos, but is not bounded by it. Once some of the more common confusions, like trying to wrap your mind around the foolishness of somehow figuring out how in the world 3=1, are cleared up and we come to grasp what the mystery of the Most Holy Trinity is not, our comprehension of God largely becomes a matter of experience, or relationship with the mystery that generates reality. I think the best definition of grace remains God sharing divine life us.

Jesus speaks to this immersion in his great high priestly prayer in John chapter seventeen: 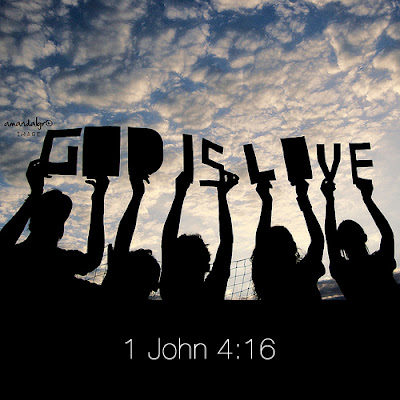 I am grateful to one of my Jesuit friends, Fr. Peter Nguyen, for this lovely reflection by a former Superior General of the Society of Jesus, the late Fr. Pedro Arrupe:

This mystery of love is the mystery of the life of the Trinity, a life of communion and communication. Love, says, St. Ignatius (of Loyola), is a communication of what one has and what one is (Spiritual Exercises, 231). This is what the Holy Trinity does. The Father begets the Son, fully communicating with Him throughout all eternity the completeness of His divine Being and the Son replies, also throughout eternity, by returning to Himself in full to the Father with all the impetus of His love (John 1:1; John 1:7). Here is the mystery of divine love, in which, as they are perfect Beings in themselves, they communicate fully by giving their own selves. Each one of the three has no separate existence. Their Being is defined by each giving of Himself to the Other Two at the same time and at all times. Each is a point of reference between the Other Two. Their whole Being is a complete, “issuing forth” of themselves (an ecstasy), a yearning towards Others, an irruption towards the Others as the Greek Fathers would say