Divine Mercy: from competition to complementarity

Just about every year during Easter week, as we approach Divine Mercy Sunday, which is the Second Sunday of Easter, there arises some tension between those of us who have a devotion to Divine Mercy and the vast majority of Catholics who do not. As with all things of this nature both sides have people on the extremes: on one side, there are those who think that preparing for Divine Mercy Sunday by praying the novena of Divine Mercy is, or at least ought to be, obligatory and, on the other, those who insist that it gets in the way of both the Triduum (the novena begins on Good Friday) and our celebration of Easter itself, and should, for this reason, actually be avoided.

It seems to me that Roman Catholics have become very adept at creating false dilemmas. I find this all the more puzzling because part of the Catholic genius is to take a both/and, or, as it is expressed in Latin, et/et (i.e., and/and- this and that, rather than this or that), approach whenever possible. Taking such an approach does not mean failing to recognize that there are some genuine dilemmas, divergences that cannot be reconciled in light of God's revelation. To wit: praying the novena of Divine Mercy is absolutely not obligatory for anyone at all, just as praying the Rosary, or any other devotion, is not.

But isn't it great that there are many thousands, perhaps even tens or hundreds of thousands, of people who observe these holy days by making recourse to Divine Mercy by observing the novena? It seems to me that the genuine dilemma when it comes to Divine Mercy is, are we to view it as somehow in competition with our observance of the Lord's death, burial, and resurrection, or as a complement to it, whether we chose to participate or or not?

For sure, devotions, which proliferated during the centuries when people often felt themselves to be spectators at the liturgy, should not obscure or in any way obstruct our view of the central of mysteries of our faith. Ideally, devotions should not only make these clearer, but be a means of our entering into them more fully. Hence, for some they can be a distraction, but for others an efficacious means of grace. This requires something to which we pay a lot of lip service, but shrink from actually doing because it can be difficult- making a spiritual discernment. In other words, two very spiritually discerning people can arrive at opposite conclusions about their personal devotion to Divine Mercy.

My response to the question posed above can easily be guessed: rather than view Divine Mercy as somehow in competition with the Triduum and the octave of Easter, I think we should view it as complementary, even should you choose not to pray the novena or feel in anyway obligated to incorporate the Divine Mercy devotion into your own spiritual life. Undeniably, the first gift the risen Lord gave to His Church after His resurrection was the Sacrament of Penance. In our Gospel reading for the Second Sunday of Easter, Jesus says, "'Peace be with you. As the Father has sent me, so I send you.' And when he had said this, he breathed on them and said to them, 'Receive the Holy Spirit. Whose sins you forgive are forgiven them, and whose sins you retain are retained'" (John 20:21-23). 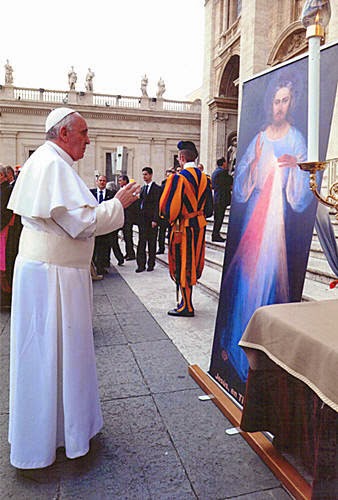 This gift of mercy, of forgiveness, of reconciliation, instituted by Christ Himself as a sacrament, is only made possible because of His death and resurrection. He then sends those on whom He "breathed" to bestow this on the whole world. I can't imagine how this does not merit a lot of serious consideration during Eastertide. Praying the Divine Mercy novena in advance of Divine Mercy Sunday strikes me as one very specific and concentrated way of keeping this is the forefront of one's awareness, but it is by no means the only way to do so.

After a pause, due to the busy-ness of Holy Week and the Triduum, I resumed reading Fr Jim Martin's Jesus: A Pilgrimage this morning. The chapter I read was on the Beatitudes. Looking at the Beatitude that bids followers of the Risen One to be merciful, mindful of the fact that while the Gospels were composed in Greek, Jesus spoke Aramaic, or perhaps Hebrew (the two languages being closely related), Fr Martin proposes that we consider the very plausible idea that when Jesus taught this He may well have used the Hebrew word chesed for what we read in English as "mercy" or "merciful."

Fr Martin rightly notes that translating chesed as "mercy" "doesn't do it justice" (173). He turns to the well-known expositor of the New Testament, William Barclay, who wrote: "Chesed, mercy, means the ability to get right inside other people until we can see things with their eyes, think things with their minds, and feel things with their feelings" (Martin 174). At least according to Barclay, mercy contains a heavy does of empathy. I think this is applicable to the annual tension that arises among many Roman Catholics during the Octave of Easter over Divine Mercy. 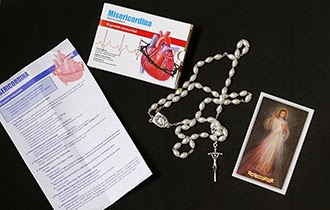 
Based on the evidence, it seems that Pope Francis, who recently declared an extraordinary Jubilee of Divine Mercy, which will begin later this year on the Solemnity of the Immaculate Conception and end on the Feast of Christ of the King in 2017, has more than a passing familiarity with and more than a general appreciation of Divine Mercy. This was evidenced by, among other things, a gift he gave to pilgrims who gathered in St Peter's Square back in November 2013. The Holy Father gave the pilgrims what he called "medicine". This "medicine" came in a box that contained a rosary along with the chaplet of Divine Mercy. At the top of the broadside of the box, in big, blue letters, appeared the word Misericordia (i.e., "Mercy"). He told those in St Peter's Square, to whom he gave these boxes, that it was "a spiritual help for our soul and to spread love, forgiveness and fraternity everywhere."