In our Psalm response, we implored the Lord to teach us his ways, which indicates we want to learn his ways in order to be his disciples and participate in his mission of reconciling the world to the Father.

If Lent is the time we devote each year to preparing for Easter, then this relatively brief period of Ordinary Time after Christmas is this time during which we prepare for Lent. Each Lent the Lord invites his Church to learn his ways by practicing them and not merely thinking or talking about them.

According to Mark, Jesus began his public ministry with these words: “This is the time of fulfillment. The kingdom of God is at hand. Repent, and believe in the gospel” (Mark 1:15). There are two things that bear noting about the Lord’s proclamation. First, he is the kingdom in person. This reality was captured well by the great third-century theologian and Scripture scholar, Origen, with his use of the Greek word autobasileia, which translates into English as “the kingdom in person.” Wherever Jesus is, there is God's kingdom. The second aspect of the Lord’s proclamation that requires some attention is the final sentence: “Repent, and believe in the Gospel.”

Translating Jesus’s words about repenting and believing in a very literal way it would be rendered be-you-repenting and be-you-believing. This, in turn, tells us two things: that repenting and believing are on-going activities; it also indicates that repenting comes before believing. Most of the time we think of believing as acquiring a certain degree of knowledge, learning the Lord’s ways through study and instruction. Then on the basis of this understanding we set about, with God’s help, to reshape our lives. It was St. Anselm of Canterbury who averred, “I do not seek to understand in order that I may believe, but I believe in order to understand” (Proslogion, sec. 1). 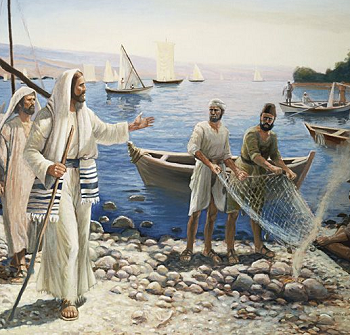 Metanoia is the Greek word translated as “Repent” in our Gospel reading. When we hear the word “Repent” we usually understand this to mean something like expressing sorrow for one's sins. But metanoia means to change one’s mind, to be converted, to be transformed from within. You are not transformed merely by thinking good thoughts, or having orthodox beliefs – though orthodoxy, or correct belief, ought to lead to orthopraxis, correct behavior, but, sadly, too often it does not. What transforms or converts you is what you do, how you act. You learn to be Jesus’s disciple by doing, like an apprentice.

The Lord’s way is the way of loving others by selflessly serving them. Our first reading today is one of the very few times we hear a passage from the Book of Jonah proclaimed during Sunday Mass. In the context of the narrative, our reading occurs after Jonah is delivered to the seashore nearest Nineveh by the “great fish” (Jonah 2:1). His unconventional delivery was necessitated by Jonah’s refusal to obey God’s call to go to this large pagan city and call them to repentance.

It’s important to recognize that God’s call for Jonah to go to Nineveh is analogous to God calling a Jewish prophet to go to Berlin in the mid-1930s and call on Nazi Germany to repent. Recognizing this is important to understanding not only why Jonah initially refused to go but why he booked passage on a boat headed in the opposite direction. Though none too happy about it, he went and called the Ninevites to repentance. It was not only to his surprise but to his great chagrin that the people of Nineveh heeded his message and repented. The Book of Jonah is not an historical book, it is a comedy, it’s a joke. The punchline is: the Ninevites converted but the prophet who called on them to do so did not.

Nineveh responded to Jonah’s proclamation by putting on sackcloth and by fasting. Along with prayer and alms-giving, which mainly consists of selflessly serving others, not just chucking your spare change into a cup, fasting is one of the Lord’s ways we need to learn. How rarely we fast! But fasting is what connects prayer to alms-giving.

Lent begins with a fast. Receiving ashes on our foreheads is our way of symbolically putting on sackcloth. It may surprise many people that Ash Wednesday is not a holy day of obligation. In other words, the Church does not obligate you to attend Mass on this day, but the Church does obligate you to fast, at least if you are 18-59 years of age. But people who are at least 14 are obligated to abstain from meat. And people who are 60 or older and are able, are encouraged to fast and or abstain. Too often the first question we ask about the two days per year the Church obligates us to fast (i.e., Ash Wednesday and Good Friday) is, “How much food can I eat and still consider myself to be fasting?” This is not repenting and believing, it’s not only wanting to have your cake and eat it but to have it frosted with some kind of imputed holiness, magically granted that requires nothing from you.

For Christians, it is always the end of the world until the end of the world. In our New Testament reading from St. Paul’s First Letter to the Corinthians, the Apostle tells the Church to live in a peculiar and self-denying manner because “the world in its present form is passing away.” We must never lose sight of the fact that the mission of the Church, the work of God’s people, is to hasten the passing of the world in its present form, preparing the way for God’s kingdom.

That Jesus issued his call to the two pairs of brothers in today’s Gospel with great urgency is revealed by their immediate and decisive response. They grasped that the moment they heard the Lord call was their time of fulfillment, not the next day, the next week, or in five minutes. Jesus calls you today with no less urgency.
at January 21, 2018