I have to admit I was kinda proud of myself for having this week's Friday traditio all thought out. You, see last Saturday marked the 50th anniversary of Johnny Cash's famous Folsom Prison concert. I had planned to pay tribute to the Man in Black this week. But on Monday I learned of the sudden death of Dolores O'Riordan, the Irish singer who is most famous for fronting a band I like very much: Cranberries.

O'Riordan was only 46 at the time of her passing. She died alone in her London hotel room. Apparently, she was in London doing some recording. Her battles with depression and bi-polar disorder which, at least to some extent, arose from the trauma she experienced as the result of being sexually abused as a child. After a suicide attempt in 2013, she was more open about the abuse she suffered. There can be little doubt her speaking out was an attempt to exorcise the demons her abuse inflicted on her. If you're interested in what her speaking out consisted of, you can look at this article: "Cranberries’ Dolores O’Riordan Suffered Horrific Sexual Abuse: 'I Buried It.'" By all accounts, she continued to experience mental health problems. Additionally, she suffered from various physical maladies. While the cause of her death is currently unknown there are a lot of markers suggesting she may have taken her own life. No matter the cause, she died too young. 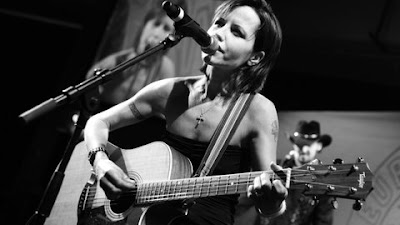 
In Spanish, the language from which the word is taken, her name, "Dolores," means "sorrows." The horrific sexual abuse she suffered at such a young age certainly caused her plenty of sorrow, too much. Her mother is a devout Catholic. O'Riordan was raised a practicing Catholic. To my knowledge, throughout most of her life, she identified herself as a Christian, albeit she was usually careful to put some distance between herself and the Catholic Church. I do not know why she felt the need to do that but I don't think she ever trashed the Church, not that it would bother me if she had. Sometimes, based on their experiences with the Church, it is very understandable to me why some people speak very critically of the Church. After all, the Church has inflicted sorrows on people. People who speak out are doing the Church a favor.

Frankly, in a world so badly in need of a punk rock revolution, the last people we can afford to lose are bona fide punks like Dolores O'Riordan.

O'Riordan has twice been featured as our Friday traditio: on 22 December 2007 singing the Ave Maria at the Vatican and again on 9 September 2011 singing one of the Cranberries' most popular songs, "Linger," with Simon LeBon, the lead singer of the British band Duran Duran. When she sang at the Vatican Christmas concert in 1995 (she sang at it again in 2013), along with her Mom she met Pope John Paul II. After meeting him she said: "I was chuffed [means very pleased] to see the inside [of the Vatican] and to meet [the Pope], who was lovely, very saintly. I was mad about him. I thought he really cared about the poor and he loved to meet the people. I saw him when he came to Limerick when I was a kid, so it was pretty mind-blowing to take my mum out to meet him."

Dolores Eileen O'Riordan rest in peace. I pray your sorrows are at an end. She and her husband divorced in 2014. Together they had 3 children. I also pray for her children who must be bereft.

Our Friday traditio is the Cranberries with "I Can't Be With You," a song off their second studio album No Need to Argue. It's a song of lament and longing and so one to which we can all relate. Her vocal stylings are very Celtic and so resonate with me deeply. I love that her Irish accent is ever-present in her music. It's one of the many things that makes her music her present to us:

Back in 2012, the Cranberries did one of NPR's Tiny Desk Concerts. It is 19 minutes and 31 seconds and worth every second of your time. This up-close performance crackles with the requisite Celtic spirit. You can watch and listen to it here.
at January 19, 2018