My bishop and the Rosman/Rocha Immigration Manifesto

Last Sunday, 6 April, just before the 11:00 AM Mass at The Cathedral of the Madeleine, where I am privileged to serve, I had the pleasure of welcoming my bishop, John Wester, back from his excursion earlier in the week to the southern Arizona desert. It was a trip he took with Cardinal O'Malley and eight other of his brother bishops to the border. As he shared some of the criticism he had received, much of it quite harsh, it occurred to me that immigration is about people before it is about politics. It is about politics because it is about people.

In my on-line browsing this week I spotted something in my Twitter feed from my friend Artur Rosman, who I believe to be one our brightest young Catholic thinkers, about immigration. Co-authored with Sam Rocha, I am happy to say that in their Immigration Manifesto, I have finally found an immigration position I can support.

At the level of what might be called "political theory," I especially applaud this:

This is why the Catholics need to look beyond national loyalties on this issue and many others. In 1960, when John F. Kennedy promised the Southern Baptists that he wasn’t going to be taking orders from Rome, he was telling them that he wouldn’t take the Vatican hardline on supporting the Civil Rights movement. Where has this gotten Catholics in American public life? Nowhere

In economic terms, especially given my distributist leanings, calling out this reality was refreshing:


The more important point is that, besides the covert and hidden ways we collectively profit from undocumented labor, there is the economic principle that is invoked on both sides of the U.S. political establishment: global capitalism. The idea, made concrete in NAFTA and countless political speeches and policies, by which goods and capital can move as freely as possible across borders, with little to no restraint, whereas people and their families are glued to their geopolitical and temporal conditions, is a perverse and inverted reversal 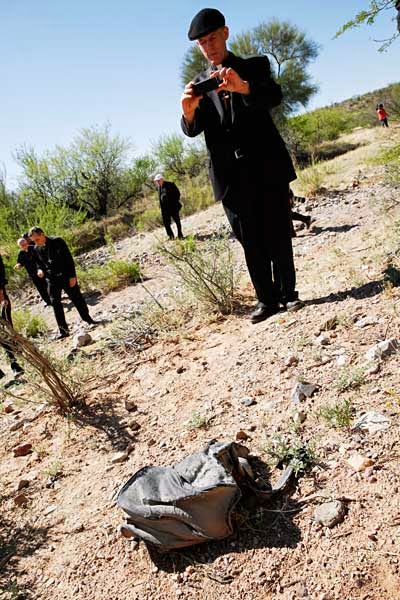 Bishop John C. Wester of Salt Lake City takes a picture of a discarded backpack in the Arizona desert (photo by Nancy Wiechec for CNS)

Manifestos call for action. My posting this is my way of sharing this with my local Church as well as affixing my name to it. As Artur and Sam insist:


The United States must stop living in a scapegoating lie. Let’s face up to it: Our most basic services (food, farming, building) are provided by people from other countries, especially Mexico. The laws under which illegal immigrants live are fundamentally unjust. They are skewed toward corporations that take advantage of a labor force that’s legally captive. The corporations also collude in propagating laws that are designed to keep that labor force legally captive. We then have the temerity to impute the label illegal to these people whom we clearly need

Getting back to the bishops' trek to the border, I have long wondered if (and if not, why not) the Mexican bishops are actively redressing their government for the kind of political and economic reforms that would result in fewer people taking this life-threatening risk.
at April 11, 2014