Attn Moralists: at least be entertaining and ironic

I spent a nice part of the afternoon reading to my children from Hilare Belloc's Cautionary Tales for Children (a book you can obtain for free from Amazon for your Kindle, or, if you're like me, the Kindle software for your PC). It brings back wonderful memories of being read these poems by my Grandma Dodge, albeit from a book.

What caused me to open the file and begin to read out-loud, which is what drew the crowd, is that I am really opposed to the notion that everything worthwhile either can be or is best wrapped up with a nice little moral story. I am beginning to see that moralism leads to sentimentality. I hate to be the bearer of the bad news, but faith ain't about nursing a perpetual warm fuzzy. Don't the saints show us this, or am I missing the point?

Rebecca, Who slammed Doors for Fun and Perished Miserably.

A Trick that everyone abhors
In Little Girls is slamming Doors.

Who lived in Palace Green, Bayswater

(By name Rebecca Offendort),
Was given to this Furious Sport.

She would deliberately go And Slam the door like

To make her Uncle Jacob start.

She was not really bad at heart,
But only rather rude and wild: She was an aggravating child....
It happened that a Marble Bust
Of Abraham was standing just
Above the Door this little Lamb
Had carefully prepared to Slam,
And Down it came! It knocked her flat!
It laid her out! She looked like that.

Her funeral Sermon (which was long
And followed by a Sacred Song)
Mentioned her Virtues, it is true,
But dwelt upon her Vices too,
And showed the Dreadful End of One

Who goes and slams the door for Fun.

The children who were brought to hear
The awful Tale from far and near Were much impressed,
and inly swore

They never more would slam the Door.
—As often they had done before.
at September 04, 2011

Email ThisBlogThis!Share to TwitterShare to FacebookShare to Pinterest
Labels: Notes and asides

Learning Christ through the sacraments

In my last post on today's Gospel, I mentioned in passing the close connection between the sacraments of penance and Eucharist. I though... 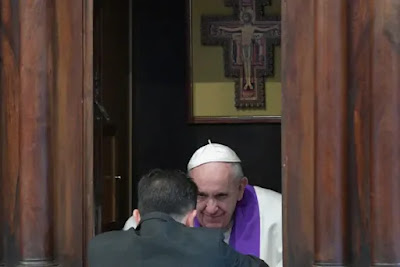