I'm pretty sure I've mentioned this before, but mid-July to mid-August is my least favorite time of the year. I guess because I'm strange, it's the time of year when my gloom gets the best of me. Generally, I do just fine in the wintertime. Reverse S.A.D.? Who knows.

Add to this the death of a dear friend... Yes, my friend, Kyle J. Sutherland, the same one I wrote about visiting to say goodbye last Friday, died last Sunday morning. His funeral was yesterday. Life is short, maintain your friendships. It's difficult but important.

As a result, our traditio for this solemn, hot final Friday of July is "A Poor Wayfaring Man of Grief." This hymn was originally written as a poem by the Scottish poet and hymn-composer James Montogomery in 1855. Celts know how to do sorrow. Family names don't get more Scottish than Sutherland. It was not Montpgmery who set it to music. Rather, it was transformed into a hymn in New York City by minister George Coles. Coles gave the hymn the title "A Stranger and His Friend."

This hymn remains in many Christian hymnals, especially in the United States and Great Britain, including in the official hymnbook of the Church of Jesus Christ of Latter-day Saints. As it is handed down, while in Carthage jail, where he was killed, Mormon founder, Joseph Smith, Jr., asked one of those with him to sing "A Poor Wayfaring Man of Grief." While not Mormon in origin, ever since, it has been included in the hymnbooks and sung among the Latter-day Saints.

"A Poor Wayfaring Man of Grief" was the closing hymn for Kyle's funeral yesterday. 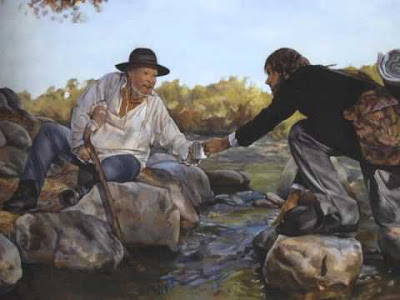 The version of the song I am using for our traditio is one recorded by David Johansen and Sylvain Sylvain of that short-lived but monumentally influential band The New York Dolls. The reason they recorded "A Poor Wayfaring Man of Grief" was in tribute to their friend and the Dolls' bassist Arthur "Killer" Kane.

Prior to Kane's passing, due to the efforts of Morrissey, the surviving members of The New York Dolls (Johansen, Kane, and Sylvain) were reunited in 2004. In the 30 or so years between the dissolution of the band and their one-show reunion, Kane joined the LDS Church. A Mormon filmmaker, Greg Whiteley, who was in Kane's ward (a ward is the local LDS congregation), made a documentary about Kane as he prepared for the reunion show. The movie that resulted is New York Doll.

Back home in Los Angeles a little more than three weeks after the Dolls' reunion show at Royal Festival Hall in London, thinking he had come down with a bad case of the flu, Kane went to the hospital. He was diagnosed with leukemia and died a few hours later. Whiteley's movie was not completed or shown until after Kane's passing. This video appears at the of the movie.

Kyle was a gifted musician. While the guitar was his main instrument, he also played piano and mandolin. He played in a number of bands growing up. Given his tastes, I think he would approve of this version as something of my blogging tribute to him. This song certainly captures the difficulties he experienced in the last few years of his life.

The Christian word for service is "diakonia" 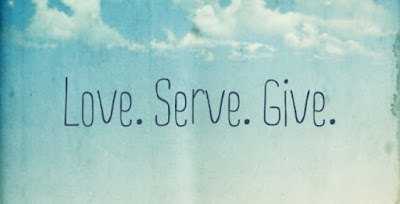