Similar to Friday, I do not have a lot to write or say on the Second Sunday of Easter. Among Roman Catholics, the Second Sunday of Easter is Divine Mercy Sunday. Of course, in today's Gospel, taken from the Gospel According to Saint John, the resurrected Jesus breathes on his disciples, thus infusing them with the holy Spirit (John 20:19-31). He tells them they have the power to forgive and retain sins. This passage is taken as Jesus's institution of the Sacrament of Penance (Reconciliation/confession).

Retain sins? Well, theologically, it can't be the power to retain sins that a person recognizes as wrong, feels sorrow for having done, and that s/he is committed to trying not to repeat. In other words, granting divine authority is different from granting arbitary power! The determination to turn over a leaf, as it were, is repentance, which is distinct from contrition, or being sorry- though, it seems, one often stems from the other.

The point is that the first gift the resurrected Lord gives to his Church, which, at this point, consists of not many followers, is mercy. He forgives them of their betrayal- this is brought home very powerfully in the next chapter of John's Gospel in the risen Lord's threefold forgiveness and reconciliation with Peter (see John 21:15-18). Being forgiven and reconciled, they are now empowered to forgive and reconcile, they are made ministers of reconciliation.

Mercy means to be compassionate toward and forgiving of someone who it is within your power to harm or to punish. God is merciful. As the title of a book by Pope Francis states: The Name of God is Mercy. It doesn't seem too much to say that if the name of God is Mercy then the name of Mercy is Jesus. 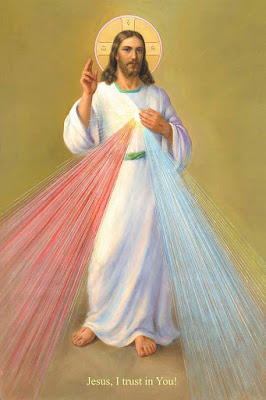 Jesus, I trust in You.


Being a Christian means being a person who recognizes and gratefully receives God's mercy given in Christ Jesus. One's ability to recognize God's mercy in Christ is itself work of Divine Mercy, that is, of the holy Spirit. But it is not enough to receive God's mercy. Being a Christian means being merciful- full of mercy. As you freely receive so must you freely give. Clearly, as Christians, we don't seem to be very good at this.

Why do we fail to be merciful? Because even though we're Christians, we remain human beings. Hence, it is all too natural for us to default to the lex talonis, which demands an eye-for-an-eye and a-tooth-for-a-tooth. As Tevye notes in Fiddler on the Roof, the result of this is that everyone ends up blind and toothless. As Christians, we must be dedicated to a world inhabited by people with eyes and teeth so they can taste and see God's goodness (Psalm 34:9).

While not opposed to justice, grace stands in contrast to karma. It seems to me that karma is a dogma. Karma is a destructive dogma in the way it is usually invoked; hoping someone who has wronged you gets what s/he has deserves. I realize that karma also holds that good is the return for good, which, while a nice idea. This idea seems to fly in the face of experience and to be somewhat incongruent with the Christian view of reality. Briefly digressing, I will say that the Christian teaching on indulgences, in its unperverted form, has something in common with the positive aspect of karma (see Pope Saint Paul VI's Indulgentarium Doctrina, especially Chapter 4).

As the late Rich Mullins sang:

For the sake of his sorrowful passion, have mercy on us and on the whole world.
at April 11, 2021