In today's first reading, which comes towards the end of the Book of Deuteronomy, Moses preaches a most stirring and important sermon. Moses's insists that what is enjoined upon Israel is not incomprehensible metaphysical drivel. I believe what Moses descibes is transferable to Christians vis-à-vis the Gospel. In fact, the Incarnation of God's only begotten Son is the enfleshment of what Moses here asserts. Without ceasing to be transcendent, God becomes immanent in Jesus. This is what our epistle reading St. Paul's Letter to the Colossians sets out so poetically. Far from esotericizing Christianity, the Holy Spirit, being Christ's resurrection presence among us, in us, and through us, enables us to make the God who is love incarnate as well. What Jesus enjoins on those who would follow him is not some esoteric wisdom, contra the gnostics, who are probably more prevalent today in non-Christian forms than in Christian. As Pope Francis noted, however, gnosticism is still too prevalent among Christians (see Gaudete et Exsultate, secs. 36-46).

What Christ asks of you is nothing other than to follow the deepest yearnings of your heart, your very best instincts and impulses. This is why what he commands is to love God with your entire being and to love your neighbor as you love yourself. Hence, "it is something very near to you, already in your mouths and in your hearts" (Deut 30:14). This what Paul refers to when he writes about the law "written" in all human hearts (see Rom 2:13-16). Since I took a shot at non-Christians in my comment about gnosticism, taking a cue from Paul, I will say here that many non-Christians seem to grasp loving your neighbor as you love yourself much better than do many Christians.

This brings me very quickly to today's Gospel, the central feature of which is the Parable of the Good Samaritan. When Jesus is asked by a scholar of the law what is required for eternal life, in true rabbinical fashion, he turns the question, putting it to the inquirer, who he knew was trying to trip him up. The scholar's reply, as one would expect, is straight out of law. Therefore, it is nothing new or surprising. The commandment to love God with your whole self is enjoined by the law (see Deut 6:5). Loving your neighbor as you love yourself is also found in the law. In fact, the commandment to love your neighbor as you love yourself is found in the section of the Book of Leviticus known as the "Holiness Code" (chaps 17-26- see Lev 19:18).

One can start to see the revolutionary nature of Jesus's teaching in the Parable of the Good Samaritan in Leviticus 19:18. The verse consists of three sentences. The second sentence is "You shall love your neighbor as yourself" and the third is "I am the LORD." The first sentence is the one that provides the context for this commandment: "Take no revenge and cherish no grudge against your own people." In other words, those who do not belong to "your own people" can be treated differently, with less deference, to state it diplomatically. But it's important to bound the scope of this by pointing out that the law has plenty to say about the treatment of foreigners, especially those who live in Israel's midst. So, while foreigners are to be treated in a just manner, they are understood to be second-class citizens in the domain of Israel.

While for those who are familiar with the New Testament this is very basic, it is important to point out that Jews and Samaritans mutually despised each other. This is why in our Gospel from two weeks ago it is notable that Jesus began his journey toward Jerusalem by traveling through Samaria (see Luke 9:51-62). It was not unusual for pious Jews in Jesus's day to avoid Samaria while traveling to Jerusalem. They did so by traveling east and heading south along the Jordan River until they reached Jericho. It was from Jericho that they made their way up the mountain to the holy city. In fact, Jesus seems to be using this very route in his parable. It was on the road to Jericho that the Samaritan finds the man who was robbed, beaten, and left for dead, the very one who was left in his misery not merely by members of his own people, but by a priest and a Levite respectively. It was likely that they left him for dead due to concerns about their own ritual purity.

In our Gospel from two weeks ago it is easy to overlook that when Jesus sent some of his followers ahead to a Samaritan village to ask the Samaritan villagers if they would welcome him and his followers for a stay, meaning offer them hospitality (i.e., food, water, perhaps shelter, an opportunity to wash), the Samaritans effectively said, "Nope. We're not welcoming them." It is their refusal to welcome them that causes James and John to ask Jesus if they can call down heavenly fire to consume the village and its inhabitants. Jesus rebukes these disciples for asking him permission to destroy their perceived enemies. He simply journeyed to a more welcoming, presumably Samaritan, village. 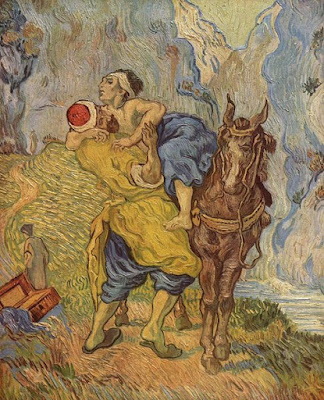 
After listening to the scholar's answer about what is necessary for inheriting eternal life, the scholar attempts to turn the table back around by asking Jesus "And who is my neighbor?" (Luke 10:29) According to the inspired author of Luke, the scholar asked this follow-up question because "he wished to justify himself" (10:29). In other words, he wanted to demonstrate both his own rightness and righteousness. To be blunt, Jesus never accedes to those who wish to demonstrate their own righteousness. This can be shown in a variety of ways, but suffice it to note that several chapters later in Luke, Jesus says "No one is good but God alone" (Luke 18:19).

The Parable of the Good Samaritan is as revolutionary now as it was back then. This is especially true at a time and in a place in which attempts are made to vilify not just the so-called "other," thus dividing people, but to treat those who enter the U.S. seeking refuge and asylum as threats instead of as people in distress. Neither should we be ignorant or blind to the fact that the U.S. has contributed heavily to the conditions these people are fleeing. I'm afraid that locking poor people in inhumane "detention centers" puts us at risk for being subject to what Jesus warned unwelcoming towns and and about when sending out his 72 disciples ahead of him as he went along his route to Jerusalem: "it will be more tolerable for Sodom on that day than for [us]" (Luke 10:12). For those who remain sex-obsessed, there is reportedly sexual abuse occurring in these detention centers.

Again, the sin of Sodom, when one analyzes Genesis 19 exclusively on its own terms, is their refusal not only to welcome Lot's mysterious visitors into their city but their despising of Lot and his family, who they viewed as outsiders, that is, "Not one of us," despite their long-term residency in Sodom. What makes our refusal perhaps even worse is that I have no doubt the vast majority the women, children, and men seeking entry into the U.S. are part of us. The vast majority are not only baptized Christians, but Catholics. In addition to being racist, the history of nativism is the United States is also rife with anti-Catholicism!

My response to anyone who thinks I am exaggerating or engaging in hyperbole is simple: if we can't apply Jesus's teaching to concrete situations, then the Gospel is a dead letter, worse than useless, just another way to self-indulgently make us feel better about ourselves or a self-help program of some mundane variety. Let's face it, we want to rail on and on about sexual morality, about which Jesus had very little to say, and other less important matters. But when push comes to shove, we are quick to excuse ourselves from the really difficult demands of the Gospel. This gives lie to the claim that the United States is a Christian nation. If we were judged on the basis of this alone, we'd be judged an anti-Christian country.

What Jesus's Parable of the Good Samaritan demonstrates is the necessity not only of recognizing that your enemy is your neighbor but that you love your neighbor (which category includes your enemies) by acting mercifully towards them. While it should flow from or result in an inward disposition, acting mercifully toward your neighbor requires just that... action. This is why we have the Corporal and Spiritual Works of Mercy. Did the Samaritan not clothe the naked, feed the hungry, give drink to the thirsty, and not only visit but see to it the sick/injured person was housed and cared for? Given the mutual animosity between Samaritans and Jews, did the Samaritan not bear wrongs patiently, forgive injuries in the face of a Jewish person in need, and comfort the sorrowful? If the answer to these questions is "Yes," then only one conclusion can be drawn: "Go and do likewise" (Luke 10:37).
at July 13, 2019