Since returning (or is that "returning"?) from my blogging hiatus at the end of July my efforts here have been pretty spotty at best. This can be put down to two factors: lack of time and lack of desire. Lately, my desire to write regularly has begun to return. As I was pondering this earlier today, it occurred to me that Advent is just around the corner. Advent, of course, marks the beginning of a new Liturgical Year. It seems a good time to start making New Year's resolutions. One of those is to renew my commitment to blogging, which I have missed terribly. As I have stated a number of times, blogging helps me a great deal. I am in need of just the kind of help blogging provides.

While I am on the subject of Advent, it bears noting that today, the day of after the Feast of St Martin of Tours, known as "Martinmas," on which fell Armistice Day- the centenary of which we observed yesterday, and my birthday, that formerly in some parts of the Western Church was the beginning of a season of preparation for Christmas. Where it was observed, it was a season similar to Lent, a season of intensified prayer, fasting, and alms-giving after the conclusion of a great feast and in preparation for an even greater one.

Most Eastern Christians are still encouraged to observe an Advent fast. Among Roman Catholics, it seems to me, Advent has become a very confused affair. This confusion predates the reforms made after Vatican II. Years ago as I was learning about these things myself and experimenting with them, I posted about them a lot. I mention this because today I am beginning my preparation for the celebration of the Lord's Nativity, that day when eternity broke into time. The Incarnation, it has been observed, "is so earth-shattering that it enacts something akin to the psychoanalytic concept of trauma" on the world. These next few weeks, Thanksgiving excepted, will be my Advent preparation.

During this period of preparing for Advent, I am going to endeavor to post more, not for your sake, dear readers, that would be presumptuous, but for my own. Nonetheless, as it's been for the past 12+ years, my prayer will be that what I write will help others encounter and follow Jesus in the hurly-burly of late modern life in advanced Western society. This milieu, the very one in which I find myself, is one in which it can be very difficult to encounter and follow Jesus. For those who are trying to follow him, it can be difficult to even really know what that means. One thing I can write with great certainty: the risen Lord is not encountered and cannot be followed by means of a political ideology, either of the left or right.

The challenge for disciples of Christ is to follow him in whatever circumstances we find ourselves. Finding out exactly what this consists of for me requires me to be connected to him through prayer. In other words, it is always a matter of discernment, of being led by the Spirit. In addition to prayer, this requires sacrifice and the willingness to step outside of myself. Dear friends, there is no Christian spirituality that does not consist of the three spiritual disciplines taught to us by the Lord himself: prayer, fasting, alms-giving. 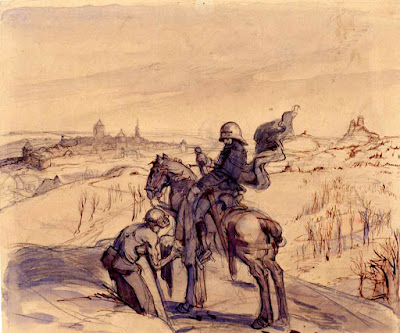 
Advent itself begins with First Vespers, known these days as Evening Prayer. Hence, the first liturgical office of the new year will be prayed on Saturday, 1 December, on or about sundown (liturgical days go from sundown to sundown, which is why you can attend Sunday Mass on Saturday evening). Here in Utah, official sundown on that day is (brace yourself) 5:01 PM.

It seems to me that Advent, despite being a short liturgical season, has several distinct aspects. The first aspect carries over from the Feast of Christ the King, which Roman Catholics observe on the last Sunday of the Liturgical Year. Each year on Christ the King we acknowledge that with the Incarnation of God's Only Begotten Son the end of the world has begun. And so, preparing for Christ's return in glory to judge the living and the dead, Advent takes on a penitential tone. Another aspect of Advent is preparing to celebrate, to commemorate, Jesus birth in Bethlehem of Judea more than 2,000 years ago. One might say these two aspects are welded together on the Third Sunday of Advent. The Third Sunday of Advent is called Gaudete Sunday (the Sunday we light the rose-colored candle in the Advent wreath and, if available, the day we wear the rose vestments, instead of the violet ones). Each year on Gaudete Sunday our Gospel reading tells us about the ministry of John the Baptist. In no certain terms, our Gospel reading calls upon to repent. This reveals yet a third aspect of Advent: Jesus coming to us now in the present.

Advent, in case you did not know, means "coming." Without exaggeration one can say that nearly all of human history has been an advent: waiting for the Lord's Incarnation and waiting for his glorious return. But it is not as though his first advent was without effect. It's not like he showed up for a little while and then disappeared again. His Ascension was followed by Pentecost. The Holy Spirit is the mode of Christ's resurrection presence between the already of his first advent and not-yet of his second. The masterworks of the Spirit are the sacraments. The Eucharist is the sacrament of sacraments. It is through the sacraments that Christ not only makes himself present now but makes himself present among us, in us, and through us.

Keeping the above in mind, for those of us who participate in Mass predominantly or exclusively on Sundays and holy days (i.e., the days we are "obligated" to participate- this number includes me), each week can be approached as an Advent, as a preparation for another profound encounter with the Lord in the Mass. Hence, we observe Friday as Good Friday, Saturday as Holy Saturday, and Sunday as Easter/Pentecost.

A practice that helps me observe each week as an Advent is praying the Rosary daily. On Monday I pray the Joyful Mysteries; on Tuesday I pray the Luminous Mysteries; on Wednesday the Sorrowful Mysteries; Thursday the Glorious Mysteries. I let this be interrupted for some solemnities, on which I might pray the mysteries most appropriate for it. Then on Friday, I pray the Sorrowful Mysteries in the morning and try to pray the Chaplet of Divine Mercy during the hour of mercy (i.e., 3:00 PM). On Saturday I might pray either the Joyful or Luminous again (during Advent and Christmas, the Joyful) and on Sundays, always the Glorious Mysteries. I know, I know this is not the traditional pattern. But then, in my view, the traditional pattern has never accounted for the Luminous Mysteries, promulgated by Pope John Paul II. It seems to me that not having a set of mysteries with which to meditate on the Lord's life and ministry was quite a discernible gap.

Just as during Advent, the Lord is with us throughout the week. It is our joy to make him present wherever we may be. It is his joy make himself present through us to others in our acts of kindness and charity.
at November 12, 2018