This past week, Wednesday in fact, the Church observed the liturgical memorial of St Teresa of Calcutta. St Teresa is more familiarly known as Mother Teresa of Calcutta, founder of the Missionaries of Charity, a religious order that serves the poorest of the poor. I point to Mother Teresa because her life exemplified the overarching point of our readings today, which is that we best perceive Jesus in the poor. It was Mother Teresa who, speaking of the poor she spent her life serving, said: "Each one of them is Jesus in disguise." Michael Card wrote and recorded a lovely song about this: "Distressing Disguise."

It is so obvious that we don't notice it most of the time, but Christianity, the Church, at least in the United States and most advanced Western countries, is largely a middle-to-upper class affair. Our churches are comfortable places, which, while theoretically open to everyone, practically have become places in which a person of the kind described in our second reading would likely never set foot. Look around your church this weekend. How many poor people, people on the margins, people who are down-and-out do you see? Chances are none-to-very few. Looking around we probably see people very much like ourselves. Of course, there's probably ethnic and cultural diversity, there are men and women, girls and boys. If you look closer, there may even be some gay or lesbian folks. No doubt, it is good that there is (hopefully) a fairly diverse assembly gathering together to praise and worship God in Christ by the power of the Spirit. A good thing for us to consider today before being sent forth to proclaim the Good News, however, is how committed is your congregation, your parish, to serving the poor and inviting them to the Eucharistic banquet. It's important that our parish's main mission is not serving ourselves. This is just the kind of self-referential sickness Pope Francis is calling on the Church to diagnose and treat.

Our very challenging reading from the Letter of St James ends with the inspired author posing rhetorical question: "Did not God choose those who are poor in the world to be rich in faith and heirs of the kingdom that he promised to those who love him?" The answer to this question is, "Yes, God chose the poor." This is not some metaphor, it is meant quite literally. Most of the earliest Christian assemblies consisted, to a large degree, of the urban poor. This should be a perennial challenge to each of us individually and to our local assemblies.

That God reaches out to all is profoundly demonstrated in our Gospel today, which finds Jesus in a non-Jewish area, the Decapolis. The man who was brought to Jesus was almost certainly a Gentile, as were the people who brought him. At that time, to be deaf and mute was a much worse handicap than it is now. There was no such thing as universal sign language, which meant those who could not hear or speak could not communicate or be communicated with very easily. They were outcasts who were often reduced to begging in order survive. Jesus's healing of the man is a sure sign that he is the Messiah foretold by our first reading in Isaiah. 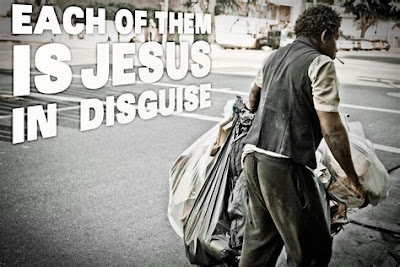 Something to which we need to attend in these readings is the prophecy and its fulfillment. Isaiah's prophecy is given in very flowery and exalted language. It is given in a way that makes the hearer think "When this happens, I will perceive it." But the prophecy's fulfillment happens in the real-world and in real-time. It consists of Jesus agreeing to lay his hand on a deaf and if not mute then inarticulate deaf Gentile who was brought to him. Look at what Jesus does: he takes the man off by himself, sticks his fingers in his ears, spits, then touching the man's tongue, looks up to heaven while groaning and utters the Aramaic word Ephphatha!, which means "Be opened!" I can only read this as being indicative of Jesus, the Messiah and Lord, laboring to bring about the Messianic kingdom, which is a new creation. This Kingdom is open to anyone and everyone, Gentiles as well as Jews. In God's Kingdom there is no us and them, there is only an us. In short, everything that Isaiah mentions is happening but you can perceive it only if you're paying attention and have idea as to what you're looking for.

All who witnessed the miracle Jesus performed could not keep quiet about it, despite the Lord imploring them not to tell anyone. In fact, the more he implored them to keep quiet the more compelled they were to tell others what they had seen him do. While most if not all of the witnesses were Gentiles, simply proclaiming what Jesus had done (i.e., "He makes the deaf hear and the mute speak"), they hail him as the Messiah. Even if only to his Jewish disciples, who no doubt were with him, it became a matter of Gentiles evangelizing the Jews: "Look! Here is your Messiah!"

How we hear and see Jesus is in the poor, the destitute, the outcast, the victim, which in our current situation is vitally important. There's a reason Jesus proclaimed that tax collectors and prostitutes were closer to God's Kingdom than many who considered themselves righteous. If we fail to see Jesus in these least then we remain deaf and blind. If deaf, then mute, not literally mute, but because our deeds do not match our words they are rendered, not unintelligible, incredible, that is, lacking any credibility. If we remain in this state, instead of being heralds of the Good News, we become purveyors of pious piffle. Today let us pray, "Lord, open our eyes, our ears, and hearts that we might recognize you in all your disguises, many of which are distressing to us."

To flesh this out more, I invite you to read as article by Dr. John M. Perkins that appears in the current issue of Plough, a quarterly to which you should subscribe: "Beyond Racial Reconciliation."
at September 09, 2018