For better and sometimes for worse, Billy Graham was a giant striding across the religious landscape of the United States. Graham passed away this past Tuesday, 21 February, at the age of 99. Like many religious figures who enjoy popular acclaim, Graham, at least for a time, came to believe in his own power and wisdom. This led him to become more wrapped up in politics and attempts to influence governance than any Christian leader ought to allow him/herself to be. The apex of Graham's political influence occurred during the disastrous presidency of Richard Nixon.

It seems to me that Graham learned from this experience and for the last roughly 45 years of his life he largely eschewed seeking the kind of influence he sought prior to and during the Nixon administration. In short, being that politically involved compromised his integrity and, in a serious way, his Christian faith. It this compromise with worldly power that many people will remember most about him. But it is clear to me that Graham learned from this and repented by changing the way he engaged.

Graham's change was not a dramatic shift. It was marked more by what he ceased doing than by what he did. His change entailed going back to what he was - an evangelist. A herald of the Good News of Jesus Christ. I must admit that I scoff at the idea that Graham was "America's pastor." I scoff for two reasons. The first reason, I've already mentioned: his attempts at pastoring presidents were pretty much disasters. Such attempts are inherently disastrous because more likely than not the would-be "pastor" is being played, that is, co-opted. In seeking "pastoral counsel," presidents and political leaders are generally looking for moral cover. Graham's 13-page letter urging President Nixon to bomb North Vietnam (see "A Prince of War Exposed") must certainly count as the nadir of his long career. My second reason for scoffing in Graham's case is that he was not a pastor, but an evangelist, which is a very different calling. If anything, a pastor must, at least to some extent, be an evangelist but evangelists in no wise require pastoral skills. Hence, I think Kenneth Woodward's "America's Preacher" is far more apt than "America's Pastor."

True pastoring requires the willingness to confront and challenge as well as the ability to comfort and console. The Church must maintain some distance and independence from worldly power if we are to remain true to our prophetic calling. To employ a worn out phrase, like the prophet Nathan (see 2 Samuel 12:1-25) and John the Baptist (Mark 6:17-29), the Church must always be able to speak the truth to power. 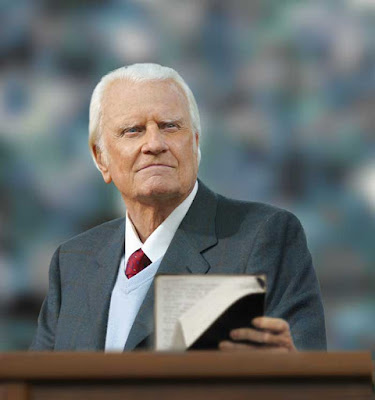 
On the positive side, I think about the reflections Bob Dylan shared about Billy Graham's ministry several years ago:

This guy was like rock 'n' roll personified — volatile, explosive. He had the hair, the tone, the elocution — when he spoke, he brought the storm down. Clouds parted. Souls got saved, sometimes 30 or 40,000 of them. If you ever went to a Billy Graham rally back then, you were changed forever," he said...

Nearly seven years ago, on a Sunday, I posted on Billy Graham (see "Christ can fill that cosmic void in your heart," which features a video of Graham preaching).

Reading David Gushee's recent memoir, Still Christian: Following Jesus Out of American Evangelicalism, I was reminded that "Evangelical" (with a capital "E") in the American context was, at least initially, a Protestant identity that sought to exist between the extremes of Fundamentalism and theological liberalism. Fundamentalism, based what were articulated as "the fundamentals in about 1920. To make a Catholic analogy, "the fundamentals" can be viewed as something akin to U.S. Protestantism's syllabus of errors. The fundamentals were formulated to combat theological liberalism. Gushee's point is that Evangelicalism was either high-jacked by Fundamentalists or was nothing but a thinly-veneered attempt to forward Fundamentalism under a more moderate guise.

Gushee, who, at least for a time, was a prominent voice among the Evangelical left, writes deftly in his memoir about being played and the compromise inherent in serving as a Christian religio-moral advisor to politicians and political movements.

Among advanced Western societies, no nation builds myths like the United States. Billy Graham's death has led to no end of myth-making, of hagiography, about this legendary preacher, both in the religious and secular media. We seem to have a difficult time dealing with the complexity of reality, especially when it comes to a person whose public career spanned some 60 years. Like most people, including Christian leaders, Billy Graham leaves a complex and mixed (i.e., human) legacy.