Making an important point in an unconvincing way

I am back after a month away from posting regularly. Sometimes it is important to let my mind lie a bit fallow. Perhaps I invest too much of myself when I post. By the end of May, while rewarding, blogging was starting to feel like hard work. Since it is something I do because I find value in doing, it is important that I enjoy it and want to do it. One thing about being an independent blogger, whenever you take an extended break you almost have to start all over in terms drawing readers. Another thing about being an independent blogger, I don't financially profit from my efforts and so building readership is not paramount. Nonetheless, I certainly hope some people find what I humbly offer worth reading.

Cutting to the chase, this week an Italian Jesuit publication, La Civiltà Cattolica, published an opinion piece that has stirred up a lot of controversy in the United States: "Evangelical Fundamentalism and Catholic Integralism in the USA: A Surprising Ecumenism" (at the time of this writing the magazine's website is inaccessible). La Civiltà Cattolica is unique among Catholic periodicals in that the contents of each issue are vetted by the Vatican Secretariat of State. This relationship means the magazine enjoys something of a quasi-official status. This relationship is nothing new, it has been published this way for a long time. The article in question was co-authored by Fr Antonio Spadaro, S.J., who serves as editor-in-chief of La Civiltà Cattolica, and Presbyterian minister Rev Marcelo Figueroa, an Argentinian who is editor of the Argentinian edition of the Vatican's newspaper, L’Osservatore Romano.

Predictably, the article has come under fire from some of those who feel they were subjects of the article's rather pointed critique. I don't want to wade too deeply into matters that are beyond my competency, but having read two critiques of the La Civiltà Cattolica piece ("On that strange, disturbing, and anti-American "Civiltà Cattolica" article" and "Antonio Spadaro has discovered a brand of Protestantism he doesn’t like", the latter of which is not adequate to the task it undertakes) along with numerous social media criticisms, I think the central thesis of Spadoro's and Figueroa's piece was lost.

Before coming to the thesis of the article, I want to explain why I think it was lost. How one arrives at a conclusion matters. The more precise the argument the more convincing the conclusion. What was offered in the article as the explanation of the brand of U.S. politics at which the authors took aim maintained a cruising altitude of 50,000'. In other words, it was too general and not nearly nuanced enough in its consideration of the relationship between Christianity and politics in the United States over roughly the last century. In my view and that of some more expert that me, Spadoro and Figueroa did not provide a credible exposition of the historical dynamics that have led to so many Catholics adopting what they see as an un-, perhaps even anti-, Catholic the political stance. Hence, their "take" is subject both to criticism and correction.

However deficient Spadoro's and Figueroa's historical explanation might be, when it comes to describing the current state-of-affairs, specifically how many Catholics came not only to vote for but enthusiastically support Donald Trump and his political agenda, which offends against Catholic social teaching on many matters (this is the case with both major political parties in the U.S., which is why I belong to neither), I think they do so quite accurately. I don't think their oversimplified history negates their main point, which is to set forth something that is at the heart of the Franciscan papacy, which is truly post-secular: 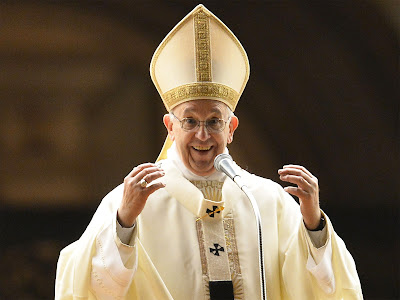 The religious element should never be confused with the political one. Confusing spiritual power with temporal power means subjecting one to the other. An evident aspect of Pope Francis’ geopolitics rests in not giving theological room to the power to impose oneself or to find an internal or external enemy to fight. There is a need to flee the temptation to project divinity on political power that then uses it for its own ends. Francis empties from within the narrative of sectarian millenarianism and dominionism that is preparing the apocalypse and the 'final clash.' Underlining mercy as a fundamental attribute of God expresses this radically Christian need

It seems to me that many Catholics in the U.S. today try to draw parallels between the Church's current situation and that of the Church's first 3+ centuries. For sure, there are parallels to be drawn, but the situations, on close examination, are quite different. For one thing, the early Church did not have the burden of centuries of Christendom to bear. The Christian message is often crushed by this weight.

One thing I think everyone agrees on is that Christianity no longer enjoys the cultural and political hegemony it once enjoyed in Western nations. Such influence wanes more all the time and shows no signs of waxing. Nonetheless (and this may be disappointing to some), I don't believe we're in imminent danger of full-out persecution in the West. People are simply more indifferent towards and suspicious of religion in general and Christianity in particular. If we're honest we must acknowledge that, along with the bad reasons, there are a some good ones. This indifference and suspicion will cause us some problems; it already has.

Right in tune with Pope Francis, in fact preceding him, is the work of the Czech priest, psychologist, philosopher Tomáš Halík, who insists the Church needs to go through the purification of secularization. In other words, we must grow accustomed to what Havel called the power of the powerless. In my view, for Christians today this is the power of joyful witness to God's mercy given in Christ by the power of the Holy Spirit.

Stayed tuned to Καθολικός διάκονος; tomorrow my homily for the Fifteenth Sunday in Ordinary Time.
at July 15, 2017