There is power in the name of Jesus

There is a great temptation when preaching or commenting on today's Gospel to say or write something that is religiously indifferent, to imply or even insist that, in the end, it really doesn't matter, just do good things. While I think there are some ecumenical implications in Jesus' response to the man casting out demons in His name in today's Gospel, I don't think there is anything in the least indifferent in what Jesus' conveyed to John in light of the beloved apostle's complaint.

Think about casting out demons in the name of Jesus: it was something the Twelve failed to do in a previous passage from Mark chapter 9. After coming down the mountain from His Transfiguration with Peter, James, and John, Jesus encounters His disciples arguing with the scribes. Upon seeing Jesus, the whole crowd, which had gathered for the dispute, ran to Him. He asks His disciples, "What are you arguing about with them?" Before His disciples had the chance to answer, a man from the crowd told Jesus, "Teacher, I have brought to you my son possessed by a mute spirit. Wherever it seizes him, it throws him down; he foams at the mouth, grinds his teeth, and becomes rigid. I asked your disciples to drive it out, but they were unable to do so" (Mark 9:17-18). Jesus then cast out the demon from the afflicted boy. Afterwards, when the Twelve were alone with Him, they asked the Lord, "Why could we not drive it out?" To which He replied, "This kind can only come out through prayer." Some manuscripts add "and fasting" after the word "prayer".

Perhaps what the disciples find so vexing about seeing a man who did not belong to their group casting demons in the name of Jesus (this is important) was it highlighted their failure to do so in the previous incident. My friends, there is power in the name of Jesus. It is a power given us in Baptism, in and through which you were constituted as a member of God's priestly, prophetic, and royal people. Too often we fail to recognize and so fail to leverage the power given us in this fundamental sacrament. As Catholics we recognize the Christianity of all who have been validly baptized in the name of the Father, and of the Son, and of the Holy Spirit. When baptized Christians seek to come into full communion with the Church we do not re-baptize them. In fact, it's important that we don't!

Just yesterday I read a wonderful article by Fr Robert Hart in Touchstone magazine on what all Christian clergy can learn from the life, ministry, and preaching of Dr Billy Graham Billy: "Graham is a Baptist, and very clearly of the best in the Baptist tradition. But he has had ecumenical appeal and been admired by Christians from all denominations. A friend of Pope John Paul II in later years, and of many well-known figures in Anglicanism and various other Protestant denominations, he really did preach 'mere Christianity.'"

In the Second Vatican Council's decree on ecumenism (i.e., the relations between Catholic and non-Catholic Christians), Unitatis reintegratio, the Council fathers asserted,


For men who believe in Christ and have been truly baptized are in communion with the Catholic Church even though this communion is imperfect. The differences that exist in varying degrees between them and the Catholic Church - whether in doctrine and sometimes in discipline, or concerning the structure of the Church - do indeed create many obstacles, sometimes serious ones, to full ecclesiastical communion. The ecumenical movement is striving to overcome these obstacles. But even in spite of them it remains true that all who have been justified by faith in Baptism are members of Christ's body, and have a right to be called Christian, and so are correctly accepted as brothers by the children of the Catholic Church (par 3)

Constituted by Baptism as God's people we can apply the words of Moses: "If only all the people of the LORD were prophets! If only the LORD would bestow his spirit on them" (Num 11:29). 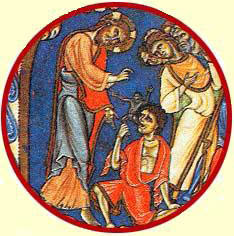 In what Jesus teaches in today's Gospel with reference to our second reading from the the Letter of James, we see that acting in the name of Jesus is not limited to spectacular things, like casting out demons. Acting in the name of Jesus more frequently takes the form of serving those in need. In his encyclical letter Deus caritas est, Pope Benedict XVI put it this way:


The Spirit is also the energy which transforms the heart of the ecclesial community, so that it becomes a witness before the world to the love of the Father, who wishes to make humanity a single family in his Son. The entire activity of the Church is an expression of a love that seeks the integral good of man: it seeks his evangelization through Word and Sacrament, an undertaking that is often heroic in the way it is acted out in history; and it seeks to promote man in the various arenas of life and human activity. Love is therefore the service that the Church carries out in order to attend constantly to man's sufferings and his needs, including material needs (par 19)

Indeed, they will know that we are Christians, that we belong to Christ, that we follow Christ, by our love made manifest in service to those in need. Jesus also points out that any one who does good to us because we belong to Him "will surely not lose his reward" (Mark 9:41).

We live life with our bodies. We are not spirits trapped in bodies awaiting release or liberation, but fulfillment and satisfaction, which will come for the saints in the resurrection. This is something God's Incarnation in Christ Jesus shows in the most profound way imaginable. While sin may originate in our hearts, we do what is wrong, what does not lead to our flourishing or flourishing of others, with our bodies. Jesus' stark warning about the seriousness of sin and its eternal consequences cannot be ignored. In this passage our Lord uses what is called hyperbole. To employ hyperbole is to exaggerate for effect in order to make a point. Jesus' here is not literally calling on us to maim ourselves for the sake of purity in order to go to heaven. After all, we don't see the Twelve, whose sins and failings are made manifest throughout the Gospels, maiming themselves. But seeking to mortify, that is, kill our sinful habits and tendencies is something Christians have done for 2,000 years.

Sin is the mortal disease of the soul, as Jesus clearly tells us in this passage from St Mark. About Dr Graham's manner of life, even when on the road, Fr Hart observed, "He was humble enough to see himself as inherently no better than other men, as a sinner who needed, for his own sake, to remain focused on Jesus Christ." Mortification, rightly practiced, enables us to overcome temptations to sin by inducing the will to accept hardships, however great. Mortifying practices, like all spiritual disciplines, are not ends in themselves, but means to an end. The end is being one with God in Christ through the Spirit. So, we need to remain always focused on Jesus Christ, keeping the Lord between us and circumstances and not allowing circumstances to obscure our focus on Him.

Seeking to put life's hardships, large and small, in the Lord's service is what gave rise to the Catholic phrase "offer it up." Sadly, these days, this phrase is almost always used in jest in response to some minor complaint uttered out loud. But the reality is, we can offer up our sufferings and afflictions and engage in practices, like fasting, that allow us to participate in God's reconciling the world to Himself in Christ by the power of the Holy Spirit. One way we do this is not by complaining out loud, but quietly offering up to God our hardships and suffering, large or small. To some extent, mortification is obligatory on all Christians. It doesn't take too much self-examination for us discover sinful tendencies and habits to which we are prone. These can be overcome, even if slowly and in fits and starts, by God's grace. We must be mindful that grace builds on nature, which means that we need to freely cooperate with what God is doing, which is bringing about our sanctification.
at September 27, 2015