A blast from the past

Way back in the mid-1980s when he sat for a lengthy interview with Vittorio Messori, which became The Ratzinger Report, then-Cardinal Ratzinger said:

"What is hopeful at the level of the universal Church- and the Church in the Western world- is the rise of the new movements into being, but which have sprung spontaneously from the inner vitality of the faith itself. What is manifested in them - albeit subdued- is something like a pentecostal movement, of the Cursillos, of the movement Focolare, of the neo-catechetical communities, of Communion and Liberation, etc. Certainly all of these movements also give rise to some problems. They also entail greater or lesser dangers. But that happens with all living beings. I am now, to an increasing degree, meeting groups of young people in whom there is a wholehearted adhesion to the whole faith of the Church, young people who want to live this faith fully and who bear in themselves a great missionary élan." 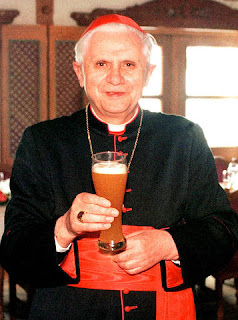 Prior to this lengthy statement, he said, quoting San Carlo Borromeo: "the Church of today does not need any new reformers [or reforms, programs]. The Church needs new saints."

In a February 2007 Q&A session with his pastors after he became bishop of Rome, the Holy Father told them "not to extinguish the charisms. ... If the Lord gives us new gifts, we must be grateful even if they are difficult. It is good that they arise without an initiative from the hierarchy. They result from grassroots initiatives...[that] come from on high, in other words from the gifts of the Holy Spirit" (underlining emphasis added).

He went on to say that the Church "is the body of Christ, and hence a spiritual body, as St. Paul says. The Church is not an international organization; she is not an executive body or an organ of power. Nor is she a social agency, though she does undertake social work, but a spiritual body."
at June 04, 2011