"Surrendered to self preservation" Lord save me! 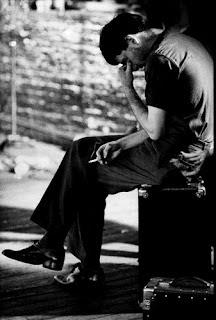 I am home alone for a few days. So, last night I finally watched the film Control, about the life of Ian Curtis, who was the singer and lyricist for one of my all-time favorite bands, Joy Division. The movie captured the drama of Curtis' life without being tawdry, or sinking to the level of a biopic. It was made with a lot of care, one might even say love, by Anton Corbjin, who knew Ian Curtis. It was Corbjin who took the picture that really captured the band. You know the one, taken in black and white (Corbjin's movie was shot in b&w), where they're in the tunnel and facing away from the camera, with only Ian turning to look behind? Given what occurred, this picture speaks in excess of a thousand words about what was happening. For those who do not know, after Ian's suicide, the surviving members of the band went on to success as New Order, which also rates as one of my favorite bands. I was too young for the original punk explosion, which, given its intensity, burned out quickly. Hence, I was even a bit too young for the immediate post-punk era, which Joy Division represents. By the time I was old enough to really be aware we were riding the New Wave of the early '80s. So, like many, I came to Joy Division through New Order. I also feel like mentioning that, like Charlie from So I Married an Axe Murderer, who "cares for Apple Jacks a great deal," I also care a great deal for Echo and the Bunnymen.

I gravitated to those bands and still do for solace because they express for me the truth about the world, the reality of alienation and the angst it produces. Also included would be REM, The Smiths, post-Smiths Morrissey, and a few other less well-known bands, without whose music I would have never made it through college. Newer groups, like Radiohead, who mine this same vein, also appeal to me. While I have come to appreciate a lot of varied music, these bands, people, music, and lyrics, along with the writings of Camus, Marcel, Kierkegaard, Heidegger, Milan Kundera, Jack Kerouac remain anchors of meaning for me on life's stormy seas. Of course, it is Jesus who calms the storm.

I would have never come to faith without these experiences because I was never interested in a phony-baloney kind of belief that offers simple answers to complex questions. Put simply, truth is not propositional, it is experiential and relational. Therefore, it has to not only make sense, but make sense to me in the context of my own life and experiences- in the words of Morrissey from the The Smiths song Panic, in which the crowd is encouraged "to hang the dj" because "the music that he constantly plays says nothing to me about my life". As one called (and hopefully gifted) to teach the faith I find it both frustrating and liberating that this cannot be communicated in a classroom, no matter how many of my famous diagrams I draw on the blackboard.

It also bears mentioning that way back, some fifteen years ago when I first encountered the writings of Giussani, in the form of a little booklet on prayer, which I sent away for through an ad in 30 Giorni, I began connecting the dots between belief and experience, between faith and life. While I was already Catholic and had been so for about three years, I was really struggling and not even attending mass regularly. Shortly after that, almost by chance, I acquired a little book, which remains one of my prized possessions. This book consists of the Hensley Henson Lectures of 1993-94, given at Oxford by John Macquarrie, who, along with the late Edward Robinson, first translated Heidegger's Sein und Zeit into English. The monograph is Heidegger and Christianity. By means of this book I met a student of Macquarrie, who hails from the north of England, like Joy Division, whose friendship and mentoring changed the direction of my life and whose kindness and unfailing generosity still grace me.

It may surprise many, I am not trying to be dramatic here, just honest so that I can communicate something of myself, but I have and still continue to struggle with depression. I have mentioned before that, by nature, I am not much of a people person. For example, what I like about being home alone these few days is just that, being alone. It has never bothered me to be alone. I am never bored when I am by myself, but I do get bored around people. I never feel more alone than when I am in a crowd. Sometimes that anonymity is fine, even enjoyable, I relish these times because I think of New Order, the English Beat, Echo, et. al. playing the old fair grounds in SLC in the early '80s. Other times it is angst-inducing. Sadly, I never know beforehand which it will be, my prior mood is not much of an indicator. One sign of my ambivalence is that I love going to mass in really big churches that are far from full. One of my fondest memories is attending a daily mass in Notre Dame Basilica in Geneva, Switzerland quite a few years ago. I just love how the eucharist anchors reality. Whether anybody pays attention or not the daily sacrifice goes on and on until, at last, Christ returns. I find this image comforting whether I think of a nearly empty gothic basilica in Europe or a missionary priest in Bangladesh offering mass in his hut all by himself. Of course we are welcome, we are expected and I love the liturgy, beyond all else it is what gives my life meaning. Nonetheless we are never coerced, especially not by shame and guilt, to attend. Perhaps the most truthful statement I have ever read, apart from "Jesus is Lord," was this one, written by His Excellency, Archbishop Francisco Javier Martinez: "the Eucharist is the only place of resistance to annihilation of the human subject".

Apart from my wife, and a few close friends, the closest of whom died immediately after high school and for whom my oldest son is named, I always feel a little bit phony relating to people, especially in a role, whether as father, boss, deacon, etc. I am convinced that my wife is the only person I could ever be married to and who could be married to me because while she understands and accepts me, she doesn't let me get away with a lot of nonsense to which I am so prone. After a time, like at the end of this weekend, I will be so glad everyone is back because I love my family more than my isolation, more than myself. This is good, this is God at work in me while "I'm doing the best that I can".

I would also like to, once again, give my gratitude to KRAD for giving me the Joy Division catalogue. Somehow, I think we're on the same wavelenghth.
at July 19, 2008