The Memorial of the Marytrdom of St. John the Baptist

Beheading of John the Baptist by Caravaggio, 1608

"Herod was the one who had John the Baptist arrested and bound in prison on account of Herodias, the wife of his brother Philip, whom he had married. John had said to Herod, 'It is not lawful for you to have your brother’s wife.' Herodias harbored a grudge against him and wanted to kill him but was unable to do so. Herod feared John, knowing him to be a righteous and holy man, and kept him in custody. When he heard him speak he was very much perplexed, yet he liked to listen -to him" (Mk. 6,17-20). Note Herod's strange fascination with this holy man. We also seem to have a strange fascination with holy people, like Mother Teresa, Pope John Paul II, Abbé Pierre, et. al.

Perhaps, we have convinced ourselves, that we can never be like them. The good news is, we are not called be exactly like them, we are called to be ourselves, called by our baptism to holiness. So, while we may glean some good things from such people, the form of holiness we are called to pursue is unique. If there is one thing the lives of the saints show us is unity in diversity. This itself is an icon of the Blessed Trinity. The call to holiness is the call to love perfectly. We do this by striving to become who we already are, by the grace of God. To become our true selves, so to speak. Of course, one revered sign of Christian holiness is matryrdom, willingly laying down one's life for God and others as a witness to faith in Christ Jesus. On the liturgial calendar, we mark the memorial of the Beheading of St. John the Baptist. 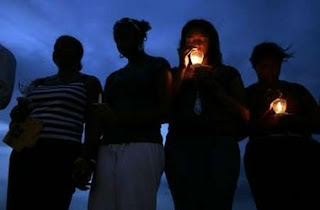 Today also marks the second annivesary of Hurricane Katrina's striking of the Gulf coast and the devastation of the city of New Orleans, which showed us the huge and ever widening gap between rich and poor in this country. In the aftermath of Hurricane Katrina, while visting New Orleans, Franciscan Fr. Raniero Cantalmessa, preacher of the papal household, speaking to victims of this devastating storm, said: "A disaster like this is not a punishment but a warning for everybody that we should be vigilant and should not put all our trust in what can be taken away in one day, if not by the flood of water, then by the flood of time. Time passes and will take everything." These words link today's memorial with our lives in a sobering, yet joyful manner.