The particular holiness of Karol Józef Wojtyła: the role of mortification in spiritual practice

Today it was publicly made known and basically confirmed that Pope John Paul II engaged in the penitential practice of self-flagellation from time-to-time. The initial report appears in London's Telegraph newspaper. As might be expected, much is being made of this and not for the better, just like when it was disclosed by her confessor and spiritual director that after a certain point in her life Blessed Teresa of Calcutta no longer felt God's presence interiorly. 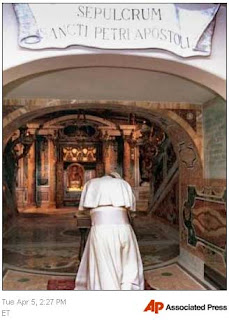 It is important to note that John Paul II did not propose this practice as something to be engaged in by everyone, or even by many, and certainly not by most. In fact, he never spoke publicly about it. Therefore, it constitutes nothing more than a part of his private spirituality, his deep, intense, and very personal relationship with God. The scandal arises from within a culture in which any sort of penitential practice for the purpose of putting sin to death is deemed ludicrous, even among most Catholics. This is very evident this time of year, when we leap Advent with a single bound in order to get to Christmas. After all, Advent has a penitential character and many Advent practices call for moderation, fasting, and increased prayer, which are typically the last things on anyone's mind as we wander the malls inundated by secular holiday songs while gorging ourselves. As a result, we lose Christmas as a season, one that runs from the Feast of the Nativity to Epiphany or the Baptism of Lord. By that time, we have cleaned up, taken our loot, and started to make our list for next year.

Even for those who pray the rosary on a regular basis, do we just glance over the Sorrowful Mysteries, the second of which is Jesus being whipped and scourged at the pillar, a mystery we contemplate as we ask for the gift of purity? Meditating on this mystery and its fruit should put us in mind of thought patterns and behaviors in our own lives that need to be mortified, put to death, killed. For example, most of us balk at the idea of abstaining from meat on Fridays, even during Lent when it is obligatory, let alone the rest of the year when it still constitutes the normative way of observing Friday, the day on which our Lord was crucified, as a day of penance! How many people even fast one hour prior to Mass, as we are also obligated to do? How many of us really and truly make an effort to fast on obligatory days, which for we Latins is only two days a year?

It should come as no shock that the disclosure, which was made as part of the Congregation for the Causes of Saints' investigation into his life, being conducted as part of the effort to have him declared a saint, reveals that he seemed to engage in the practice regularly prior to ordaining priests and bishops. Again, how many of us fast and increase our prayer before something like that, before being confirmed, or going to confession, or getting married? I honestly do not know the answer to those questions, but I am confident that some people do. Again, I am certainly not advocating that anyone incorporate self-flagellation into their lives and spiritual practice, let's work on praying daily and fasting and abstaining regularly, just living what throughout most of the church's history has been known as a Christian life, consisting of the regular and routine practice of the spiritual disciplines. The practice of self-flagellation is, indeed, extreme, but not utterly insane in every instance. For someone to decide to take up such a practice as a result of reading a news report, a magazine article, or a blog post would reveal a great deal of spiritual immaturity, not to mention an utter lack of discernment. In fact, no intense mortifying practice, even extra or extended fasting, should be undertaken without the guidance of a spiritual director who knows what s/he is doing.

For Eastern Christians it is customary to meet with their priest, or their spiritual director, prior to the Nativity Fast and the fast of Great Lent to determine what practice is appropriate for them, given where they are spiritually and the exigencies of their lives. While there are certain universal practices (prayer, fasting, alms-giving) and even customary times to perform them more intensely and intentionally (Advent, Lent, Fridays and even Wednesdays), one size does not fit all. By the same token, there are some sizes so peculiar that they fit very, very few. Nonetheless, these few do something valuable for the rest of us.