Opposing God to nature: the denial of the ontologically obvious

In his work the The Antichrist, Nietzsche correctly observed that "Once the concept of ‘nature’ had been opposed to the concept of ‘God,’ the word ‘natural’ necessarily took on the meaning of ‘abominable’—the whole of that fictitious world has its sources in hatred of the natural (–the real!–), and is no more than evidence of a profound uneasiness in the presence of reality. . . . This explains everything.” It may not explain everything, but it certainly explains a lot, especially about Christianity in its western mode, which opposition probably reached its apex in the nineteenth century. Christianity was the object of Nietzsche's attack. 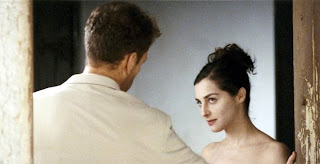 Overcoming the effects the opposition between nature and God, not just with regard to the feminine, but concerning women, constitutes the reason for Catherine Breillat's film Anatomy of Hell. Her short interview with Sight and Sound demonstrates this to an extent.

However, it is David Durnell's Woman’s Body as an Anatomy of Hell: Nihilism, Recursion and Tragedy in Breillat’s Anatomy of Hell that really gives insight into her intense and extreme creation. My only criticism of Durnell's analysis of the film is that he mitigates and reduces Breillat's take on male homosexuality. He is correct when he observes that she holds the presupposition "that gay men 'do not like women,'" and that she "is less concerned with the feelings of the homosexual male than she is with the repressed and fragmented 'self' of the female, and how that female views men –and thus views herself." But he is just plain wrong, veering off into the politically and academically correct, which Breillat rejects at every turn, that the way she depicts "homosexuality is figurative" and that "the man in her film [is] more an Image of [an] alpha-male, religious chauvinist than he is overtly 'gay.'" This is a move that introduces a false distinction into the film, one not made by the author/director. While it may seem a small thing, it disorients her work and compromises the recovery she attempts by way of implication, whether directly intended or not. As a result of making this film, she was denounced as a homophobe. Before we can discuss something intelligently we have to be honest about what we see and judge it accordingly. While still not at all accurate, it is more honest to denounce her as a homophobe than to make the move Durnell makes; both are ideological moves, but Durnell's is artificial, that is, something tacked on afterwards.
at October 22, 2009

Email ThisBlogThis!Share to TwitterShare to FacebookShare to Pinterest
Labels: Cultural