Our on-going cultural embrace of non-being

I was perusing the issue of America magazine in which my article on the permanent diaconate appeared. When it was published, I was so focused on the diaconate articles, my own and those by Dr. Ditewig and Greg Kandra, as well as on the subsequent on-line dialogue, that I missed a lot of what was in that issue. Besides, I had not yet had my late summertime re-engagement with the writings of Samuel Beckett.

What drew my attention was the picture from a recent Broadway production of Beckett's play Waiting for Godot, featuring John Goodman, Nathan Hale, and Bill Irwin. I then looked at the title of the article, by Fr. Robert Lauder, who teaches philosophy at St. John's University in New York: Accept the Absurd: Beckett and Kierkegaard, Godot and Christ.

Altering something written by Heidegger, Fr. Lauder observes that God's death and/or absence "is the horizon against which some of the most highly respected playwrights of the 20th century created their work. I think of Luigi Pirandello’s six characters searching for a meaningful narrative, of Edward Albee’s angry creations making contact only through violence, of Harold Pinter’s people mouthing non-sequiturs as they search for their identity and of Eugene O’Neill’s Tyrone family looking for forgiveness. All these characters exist in a milieu in which God’s absence has serious consequences for human fulfillment. All of them struggle against what Paul Tillich called the threat of nonbeing: the threat of self-rejection, guilt, despair, fate and death. Beckett has taken the premise of God’s death to its logical (or illogical) conclusion." 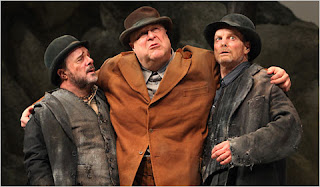 Fr. Lauder's reflection further verified for me that truth of the statement made by Oscar Giannino, who said in an interview in the current issue of Traces that "the prevalence of language over reality, condemns culture to being merely a descriptive shelf on which the prevalence of Non-being drowns, rather than the instrument for continuous transformation based on the person who wants Being." Giannino's words clarified for me the repulsive attraction I have to the works of Beckett and to other such works, like Tennessee Williams' Night of the Iguana, etc.

The other day on my drive home from work I listened to Johnny Cash's recording of Trent Reznor's Nine Inch Nails song Hurt. It begins like this:

"I hurt myself today
to see if I still feel
I focus on the pain
the only thing that's real
the needle tears a hole
the old familiar sting
try to kill it all away
but I remember everything
what have I become?"

Of course, the answer to this question is simple: a junkie. The junkie is not the protagonist of history. Intoxication, as Freud pointed out, is but one way of avoiding the suffering, the passion, of human existence. The Buddha was right that to live is to suffer, but that is not all. To live is also to love, to experience joy. According to Freud, intoxication is both the "crudest" and "most effective method" of pain avoidance, as "it is a fact that there are foreign substances which, when present in the blood or tissues, directly cause us pleasurable sensations..."'

Perhaps the junkie or the addict is the beggar who thinks that this is as good as it gets, the ones who have given up on transcendence, like the one who is willing to "love" the one s/he is with, not recognizing that a mere orgasm is no more transcendent than being stoned or drunk. The beggar is the one who is not willing to settle for anything less than the life that is life. The beggar moves, implores, asks, begs, unlike Beckett's hobos, who do not move, but who nonetheless recognize their need "to go," and who are unable to budge "because without God," Fr. Lauder writes, "there is no direction or goal to the human journey."

Even this last observation does not get us all the way home, or even on the pilgrim path because this is what Feuerbach meant when he wrote that if God didn't exist human beings would have to invent God. It is not just the death, but the murder of this God, the God of logical or existential necessity, the God of the pragmatic move, that sparked this cultural movement. It was Kierkegaard, as Fr. Lauder points out, who "characterized the Incarnation as absurd." Absurdity for Kierkegaard did not mean that which lacks meaning and coherence. Rather, using Lauder's words, the Dane referred to "what is full of mystery, the superabundance of meaning, the supra-rational, that which is beyond human comprehension," to what Giussani identified as the dynamic and inter-personal phenomenon of correspondence.

This does not call into question the consonance of faith with reason. It is merely to do justice to both by reducing neither. After all, knowing is not merely a material act.

I think this speaks to what I earlier posted about atheism.
at September 09, 2009